Adelaide Law School student Jonathon Tsianikas recently completed a Public Law Internship with the South Australian Crown Solicitor’s Office. Here, he reflects on a recent South Australian judicial review decision that he was involved in during his time at the Office.

If you disagreed with a government decision that affected you, you might have options to deal with it: depending on the relevant statute, you could have rights to an internal review or an administrative appeal.

You need look no further than the prominent judicial review cases in the High Court, on behalf of asylum seekers, to see how important it is as a principle of the rule of law that government action can be tested by an independent judiciary. This is so even if you disagree with particular outcomes.

But as important as judicial review is, it is rarely a realistic option for ordinary people.

That brings us to the Ombudsman. Making a complaint to that office does not require the help of a lawyer, and there are no application fees.

Hailed as ‘virtually … a judicial office to guarantee that complaints are investigated’ by the Commonwealth Attorney-General (Lionel Bowen) when the office was created at the federal level, but also described as ‘the formulator of administrative equity by the power of persuasion’ by the Attorney-General in South Australia (Len King), the Ombudsman is best understood as an independent officer appointed by Parliament to serve a watchdog role. Given these competing interpretations, it’s no wonder they have been called ‘constitutional misfits’ as well as ‘administrative law superstars’.

The first South Australian Ombudsman was Gordon Coombe. His second annual report (covering July 1973 – June 1974) shows how the office quickly set about helping those with no actual or realistic rights of review.

He wrote in that report:

Even in cases where a citizen’s complaint has been established as not justified, I find that there is often considerable therapeutic value for him in being provided from a neutral corner, as it were, with an authoritative and detailed explanation of the decision …

The essence of the Ombudsman’s charter is concern for the welfare of the individual citizen in his personal relationship with government.

This is what has been called the Ombudsman’s ‘fly-swatting’ role. But they are also ‘lion hunters’.

In an investigation last year into whether a local government councillor had a conflict of interest, the current Ombudsman (Richard Bingham) concluded that no conflict existed, but wrote, ‘I express some disquiet about this, as I consider that “the ordinary person in the street” would perceive [a conflict].’ He concluded by recommending the amendment of the Local Government Act 1999. The Ombudsman is in a unique position to interpret and apply the law but also to make the recommendation that he thinks is best regardless; this is because his reports are just that — his opinion. They have no legal force, and that is one of the office’s strengths.

However, perhaps as a consequence of being ‘constitutional misfits’, on the rare occasions when the courts have been involved, the outcome has usually been negative for Ombudsman offices across Australia.

In 2011, an Adelaide company contracted with three local councils to dispose of tyres at their waste depots. It took the tyres to land it was renting in Burton. It had neither an EPA license, nor development approval. The director of that company is now in prison, and it no longer exists.

The owner of the land (by then containing thousands of tyres), having had no success contacting the councils directly, had no recourse other than to complain to the Ombudsman. The Ombudsman investigated and, in all three scenarios, recommended that the relevant council remove the tyres.

You may wonder why judicial review was an option at all. As mentioned above, it exists to ensure the lawfulness of government action. But the SA Ombudsman wasn’t forcing the council to do anything — it was free to reject his recommendation, which it did.

Stanley J accepted the argument that the Ombudsman’s opinion should be judicially reviewable because of the possibility of the State Planning Minister (John Rau) relying on it to take action under the Local Government Act 1999. That action could be as minor as making a mere recommendation to the Council, or as drastic as resulting in the suspension of councillors. In fact, the Minister hadn’t done anything, nor was there any suggestion that he would; were he to, realistically, it would only be on the minor end of that scale.

It must be said that the Ombudsman did himself no favours. His report was somewhat unpolished, and he based his conclusion that the Council was wrong not to make inquiries as to the company’s credentials on the Council’s procurement policy, which required all purchases to be ‘compliant with relevant legislation’. To say that the Council should also make sure that its contractors have the right licenses does not immediately follow, but if that is the Ombudsman’s opinion — if the Ombudsman thinks it just for the Council to take responsibility for the tyres — what principles does it offend?

Stanley J applied the legal test of ‘Wednesbury unreasonableness’ (which takes its name from an English case). For it to succeed, a Court has to be satisfied that a decision is so unreasonable that no reasonable decision-maker could ever have made it. While something of a tautology, the test sets a deliberately high bar that plaintiffs seeking judicial review rarely meet. But surprisingly, the Council was successful on this point. Stanley J said:

In my view the Ombudsman’s opinion does not fall within a range of possible, acceptable outcomes which are defensible in respect of the facts and law.

He said that the recommendation based on the opinion was manifestly unreasonable as well:

Given that tyres have been dumped … from the plaintiff’s depot as well as depots operated by the Salisbury and Playford councils, the plaintiff is in no position to be able to identify which tyres dumped on the Burton property have come from its depot.

With respect to Stanley J, which council is responsible for which tyres isn’t important. Salisbury and Playford each having taken care of their fair share, the tyres that remain are the same in number as those that came from Port Adelaide’s depot, regardless of whether they are the same ones or not.

So the council got what it wanted — the Ombudsman’s report, which had no coercive legal effect to begin with, is no more — having spent tens of thousands of dollars. Meanwhile, at a property in Burton, hundreds of tyres lie in haphazard piles. 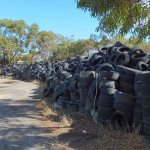 Jonathon would like to thank Mike Wait and Jesse Metzer from the Crown Solicitor’s Office, and Dr Laura Grenfell from the Adelaide Law School.