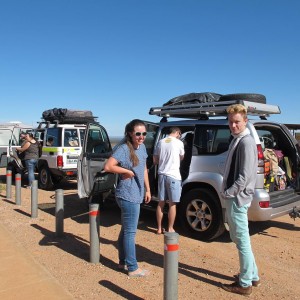 “Meet 7am, near the Barr Smith Lawns, keep packing to a minimum. No suitcases.”

Following Paul’s exact list means some of us don’t have a towel. Trust law students to over interpret this omission (because there’s only one shower? Err, no, Paul just forgot). Luckily, ‘Fix-it’ Dan promises towels through his Port Augusta connections.
A head count – 16 of us, cozily divided into three 4WDs. Paul, Kellie and Renato are designated drivers. Just as the final luggage is loaded, a male student strolls up to the group, wheeling a very large over-stuffed suitcase. Paul looks aghast. Fortunately for that student, it was the geography bus trip he was looking for.

The idea is, let’s swap passengers between vehicles. We never do. It’s the same people in the same cars for five days. The chat never lags. In Kellie’s car, the first discussion is on her and Dan’s shared experience working on death row appeals in the United States. It moves to an examination of gun control and a feminist analysis of romance fiction. So riveting these talks, Kellie almost takes the wrong lane for a detour to Salisbury (easily done on Port Wakefield Rd). 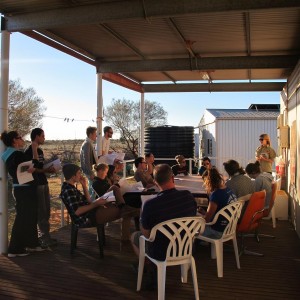 Having a debrief at the campsite

More than 600km of driving has to be covered, on and off road, under clear blue skies. First stop is for baked goods at Port Wakefield. Then a great feed at Primo in Port Augusta, while watching the televised Royal visit to Elizabeth (perhaps the real reason for the near detour?).

Next stop is Pimba, to stretch our legs. We admire the use of rego plates as interior decoration in the petrol station. Then we’re back in the car to gaze out at the vast emptiness of the arid environment, and to take in Paul’s lessons about the Goyder Line. For those of us who have never been this far north, it is a surreal, eerie and beautiful awakening. Finally the arrival at the Arid Recovery Centre near Roxby Downs. The centre’s friendly guide, Perry, escorts us to the camp site, gives us a safety talk, including an explanation of the toilet and shower. It can’t be a good thing when she shyly explains about a ‘bacteria imbalance’ causing a strong pong. To steal a line from the movie Kenny, ‘there’s a smell in here that will outlast religion’. (We all resolve to fundraise to build a new loo for
the centre.)

A quick set up of tents or sleeping bags in the camp’s bunk-bed sleeping accommodation (housed in shipping containers). Some opt for swags. After a trudge through the red dirt to view the sunset and nearby Olympic Dam from a lookout, we return to the accommodation deck. While waiting for a curry dinner prepared by Paul, we admire the friendly bettongs and stick-nest rats, and keep looking out for bilbies. Dinner does not disappoint. Four delicious choices for a hungry mob, including vegetarian, followed by chocolate. It’s then off to bed. Paul apologises in advance for snoring loudly. What a marvelous beginning.