On Friday morning, we hopped on the tube bright and early to head to the London School of Economics and Political Science. We were very fortunate to have a lecture from Professor Tony Travers, a Director of LSE London, one of the School of Economics’ research centres. His extensive knowledge about British politics, both in theory and practice, was evident in his engaging presentation about various aspects of the 2015 UK General Election.

Tony discussed overall themes of political representation in the UK political and legal system. He even used the example of William Hogarth’s 18th century paintings, held in a gallery not far from the LSE, to reflect upon the history of political representation and voting in the UK – these included a dead man being carried to vote, an interesting comment on how ‘democracy’ can function. He provided us with a very useful analysis of trends in recent election results and electoral polls. Through comparisons between 2010 and 2015 electoral polls, Tony demonstrated the gradual decline of the two major parties – Labour and the Conservatives – and the rise of minor parties. Interestingly, the 2015 General Election is expected to see at least five parties win 5% or more of the overall vote. He also gave us an insight into the potential constituencies that may be won by various parties, and interestingly, that the electoral boundaries in the UK mean that the percentage of overall votes needed to gain majority is not equal between Labour and the Conservative parties.

Given that a traditional majority government appears unlikely based on current trends, Tony also provided an interesting practical guide to the possible coalitions who could form government in the context of a hung parliament. While we in Australia have become somewhat accustomed to having a hung parliament in recent years, Tony explained that this was unusual for Britain, where every election from 1979-2010 resulted in a classic majority government. Our group agreed that Tony’s presentation was highly informative, and gave us a better understanding of the electoral processes in a very accessible way. His insight into the possible outcomes of the election – whether government by coalition or vote-by-vote agreements between parties – will be very useful for us over the next week, and when watching the election results come in on May 8th.

We were lucky enough to enjoy morning tea at the London School of Economics after Tony’s presentation, which provided us with an opportunity to reflect on the week as a group. We discussed our ideas so far for our research paper, the major piece of assessment for this subject, which we will complete at the end of our trip. Additionally, we were able to pose some questions which had arisen during the week to John and Clem – a lively half an hour which demonstrated the many interesting themes we’ve observed during our time in London. These included Britain’s non-codified constitution – a key point of comparison for us as Australian law/politics students – the devolution of Scotland and the independence movement, and referendums in the UK. We are certainly lucky to be supported during our study tour by Clem Macintyre and John Williams – their shared knowledge is very extensive!

Overall, it has been a busy week – as Clem said, of both walking and working! – but our time in London so far has been very worthwhile. We’ve had the opportunity to visit some fantastic educational and tourist sites, and to experience all aspects of life in London, including peak hour on the tube (a difficult experience sometimes with a group of 27!). Our week of activities has allowed us to get to know one another and to make friends as we navigate the city and our study tour experiences together. As Clem and John acknowledged on Friday, we are lucky to be travelling with such an enthusiastic and motivated group of our peers.

Most importantly for this trip, we have also gained a huge amount of knowledge about the British political and legal systems in such a short amount of time. Our range of class seminars, lectures from interesting and highly knowledgeable academics, and visits to some of London’s most important institutions have allowed us to truly engage with our study of the UK’s political and legal structure. 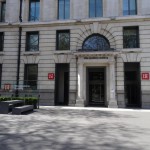 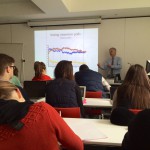 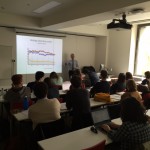 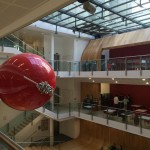