While student life and poverty tend to be synonymous, scholarships can enhance one’s sense of independence and dignity.

As a recipient of the Bob Piper Law Scholarship, Jonathon Wenham said the $5,000pa would not only help him meet the costs of his education, but allow him to say “yes” (without feeling guilty) when his friends said they were going out for the occasional meal.

Coming from country Victoria, his parents sent him to the local high school where he remembers being more ‘humanities’ focused, having a love of History, Literature, Economics and English. These were subjects he saw as fostering great creativity and “the skills to get things done” Jonathon said.

In Year 10 (like all students) he was required to do work experience. Deciding where he’d like to work, he knew he wanted something office-based; securing a placement at a sole practitioner law firm. Among the duties he was asked to perform by the firm’s Principal was a request to cost some of the cases being managed. This gave him an appreciation of how businesses operate; specifically, the value of labour, the importance of communication and the reliance on clear and concise documentation. 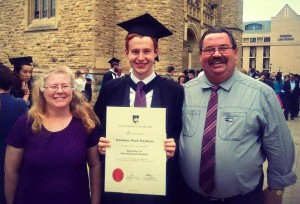 Jonathon and parents Brenton and Lynelle at the graduation ceremony

Moving to Adelaide in 2011 to attend University (the 1st in his family), Jonathon chose Law and International Studies. In 2013 he was awarded the inaugural Piper Alderman Scholarship: funded by Piper Alderman this meant he was able to make connections that led him into part-time work with that firm in his final year of study. This helped him to refine his preferences and crystallise the areas of the law which offered greater challenge, interest and appeal.

Jonathon is very thankful he was able to get to know Bob Piper personally. Reflecting on the rare occasions they were able to spend time together, Jonathon said “Bob is the quintessential lawyer; a man of integrity, holding strong values, a firm sense of community and a wonderful blend of both the hard and soft skills required in the legal fraternity. He is an inspiration”

Having completed his undergraduate degree, Jonathon reflects on the impact of the scholarship. He acknowledges the significant effect it’s had on his life; primarily giving him financial independence. “It enabled me to buy text books, a laptop, to go out occasionally and to purchase a new suit. It helped me feel like a real person” he said.

The gifts and support of others empowered Jonathon: to complete his secondary schooling; to attend University and to complete his studies. More importantly, their support gave him choice – the ability to decide on his life’s direction.

Scholarships make an incredible difference. And when the time comes, Jonathon knows he will support others like he’s been supported.