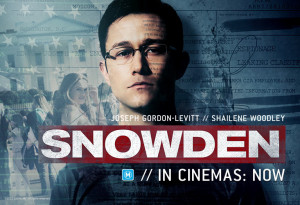 The Cyberwar, Surveillance and Security MOOC (Cyber101x) offered through EdX by RUMLAE and Adelaide Law School members, considered the actions and motivations of Edward Snowden, the former NSA contractor who in 2013 released a vast amount of information regarding surveillance and security operations of the US and other Five Eyes partners to journalists Glenn Greenwald, Laura Poitras and Ewen MacAskill, and the consequences of those actions. On the basis of this expertise, Professor Melissa de Zwart was invited to speak at the Adelaide premiere of the Oliver Stone movie SNOWDEN. The movie examines the motivations and actions of Edward Snowden, played by Joseph Gordon Levitt. 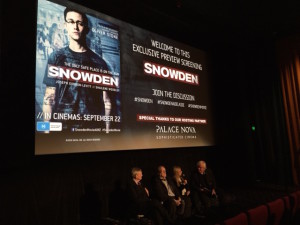 The movie has provoked a renewed interest into the plight of Edward Snowden, currently living in exile in Russia, with a “Pardon Snowden” campaign being initiated to seek a Presidential pardon for Snowden, who is facing charges under the US Espionage Act, from President Obama.

The launch was well attended by a number of members, including Advisory Board member, Professor Lilian Edwards, and Prof Melissa de Zwart, who provided some insights into the relationship between the movie and real life events. This provoked audience discussion into the ongoing ramifications of the Snowden disclosures for governments and citizens alike and also some examination of the issues of freedom of communication, rights of privacy and the security of the online environment.

For some further analysis of the campaign for Presidential pardon, see this Op-Ed by RUMLAE Advisory Board member Professor Jack Goldsmith: Op-ed: why President Obama won’t and shouldn’t, pardon Snowden. 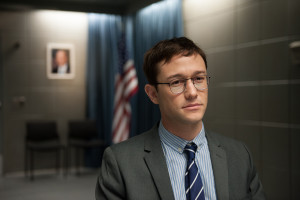