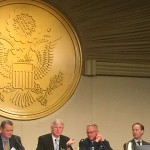 In mid November 2016, RUMLAE Director Associate Professor Stephens was invited by the American Bar Association (ABA) Standing Committee on Law and National Security to present at the Annual Conference held in Washington DC.  A/Prof Stephens presented on the topic of the role of informal mechanisms of law in creating normative frameworks for decision making in the national security area.   The principal focus of the presentation was the current work being undertaken on the Manual of International Law Applicable to Military Uses of Outer Space (MILAMOS), a multi national project involving legal, military, diplomatic and technical experts from around the world led by the University of Adelaide and McGill University (Montreal).  Adelaide Law School staff directly involved in the MILAMOS project include Prof Melissa de Zwart, Associate Professors Dale Stephens and Matthew Stubbs and Ms Stacey Henderson.

The auditorium where the ABA Conference was conducted held 550 lawyers of the ABA and comprised many current and former national security lawyers who served / are serving in the Bush and Obama Administrations. Joining Associate Professor Stephens on stage for the Panel on National Security and Space Operations was Mr Renn Gade (member of RUMLAE Board of advisors and Senior Counsel NCTC) Major General Jeffrey Rockwell (Deputy JAG, USAF) and Mr Rob Ramey (ICRC).  All speakers stressed the importance of the MILAMOS project given the recent failure of the international community to agree a treaty dealing with the continuing militarisation of space.   The presentation was followed by a number of questions and discussions were subsequently initiated on how the ABA might best contribute towards the substantive development of the MILAMOS Manual.