Dr Manuel Solis, a Lecturer at the Adelaide Law School, co-headed the first University delegation to the 22nd Conference of the Parties, UN Framework Convention on Climate Change (UNFCCC COP 22) held in Marrakech, Morocco, from 7 to 18 November 2016. Professor Andy Lowe (co-head of delegation) from the Faculty of Science and Professor Mike Young from the Centre for Global Food and Resources also joined Dr Solis as University delegates to the UNFCCC COP 22. 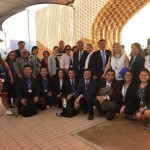 tion to his role as a University delegate, Dr Solis was invited to join the Philippines delegation as a non-government legal and policy adviser, and thus, granted a party or negotiator rather than observer status in COP 22. This is the second consecutive year in a row that the Philippines Government had invited Dr Solis to join its official delegation to the UNFCCC in the aforementioned capacity in recognition of his expertise and research in the climate change area.

COP 22, which is dubbed as the action COP, is a significant session for the Parties to the UNFCCC considering the rapid entry into force of the Paris Agreement less than a year from signing. Thus far, 115 of 197 signatory countries have ratified the Paris Agreement representing almost 80% of global emissions. Among the key issues discussed in COP 22 include accelerating work on the Paris Agreement rulebook and to provide a definable pathway for developed countries to materialize the flow of USD $100 billion per year by 2020 in support of climate action by developing countries.

After the conclusion of COP 22, the University of Adelaide has been formally admitted as an observer organisation (NGO) to the UNFCCC (see link http://unfccc.int/parties_and_observers/ngo/items/9411.php) with Dr Solis as the University’s Designated Contact Point to the UNFCCC. Accordingly, it is envisioned that the University will have a meaningful, collaborative and continuing engagement with the UNFCCC in the many years to come.

This entry was posted in Events, News and tagged 22nd Conference of the Parties, Dr Manuel Solis, UN Framework Convention on Climate Change. Bookmark the permalink.