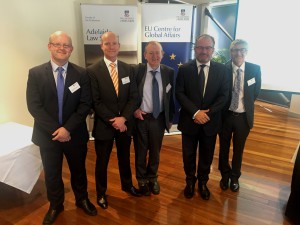 On Thursday 16th March at the National Wine Centre, ROCIT, in conjunction with support from the University of Adelaide’s EU Centre for Global Affairs, hosted a symposium on Business Rescue in Australia and the EU. The morning was devoted to presentations from Professor Gerard McCormack of Leeds University, and Professor Michael Veder of Radboud University, Nijmegen, both of whom have worked with the EU on business rescue and insolvency initiatives. Highlights included the impact of Brexit on rescue reform across the EU, especially given that the EU legislative proposal issued on 22 November 2016 seems to follow the UK Scheme of Arrangement, as well as aspects of the US Chapter 11 procedure; other issues common to Australia and the EU were the SME sector, growing use of schemes (Part 5.1) in larger cases; proposals to outlaw ipso facto clauses on corporate insolvency, and the interrelationship with directors’ duties in the ‘twilight zone’ of insolvency.

In the afternoon David Proudman of JWS asked and answered the question whether Australia’s ‘toolkit’ for corporate rescue, particularly the Voluntary Administration and Deed of Company Arrangement procedure, were fit for purpose in the global twenty-first century. In particular he gave fascinating insights into the Arrium steel rescue process and concluded that this illustrated the flexibility of the Australian regime. The afternoon concluded with Associate Professor Jason Harris of UTS discussing some findings from his PhD at University of Adelaide, in particular empirical research about the use of VAs relative to other procedures and the perceptions of insolvency practitioners, before concluding with discussion of recent Australian reform proposals by the Productivity Commission and Commonwealth Government, and implementation of the recent Insolvency Law Reform Act 2016.

Attendees commented on the high quality and topicality of the presentations and ensuing discussions, and the splendid Wine Centre venue.