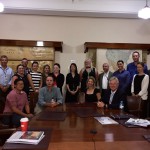 RUMLAE members, Dr Colette Langos, Dr Mark Giancaspro, along with A/Prof Matthew Stubbs recently taught a pilot course on ‘Operational Commercial Law’ to a number of Australian Defence Force Legal Officers and Cth Dept. of Defence Lawyers in Melbourne.  The course was designed and developed principally by Dr Langos and Dr Giancaspro to focus on the application and interpretation of procurement rules, financial governance, work place health and safety law as well as contract management issues in circumstances when Australia has deployed forces overseas.  In a time of such military operations (ranging from armed conflict to peacekeeping through to humanitarian disaster relief) where mission accomplishment goals have an obvious priority, there is still a requirement to ensure the Commonwealth rules and applicable law regarding the conduct of commercial transactions, as well as the maintenance of legislative work place safety standards are fully adhered to.  This raises obvious challenges given the heightened risk context in which these governance mechanisms must apply. In addition to the operational threats, there is also the reality of a starkly different cultural and legal environment in which Australian soldiers are operating that needs to be factored into a decision making process and accommodated.  In addition, there are numerous international legal arrangements, especially with coalition partners, that also need to be reconciled with Commonwealth Government commercial rules and standards and applied confidently by Australian Commanders in an operational area.

The course was taught at Joint Logistics Command (JLC) in Melbourne and attracted 15 legal officers.  The feedback from the first pilot course has been very positive and RUMLAE is working 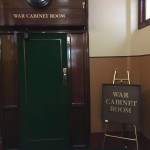 with the Defence Department to develop a second stage pilot course that will expand on a number of areas identified as warranting addition or expansion for this course.  While the course was mostly taught in the main auditorium of the Command building, one day of the course was actually taught in the old War Cabinet Room that is located at JLC and was used by the Australian Government during the Second World War.  RUMLAE Director, Prof Dale Stephens attended the last day of the course and led some of the discussion regarding operational context in which commercial legal principles needed to be applied.

Dr Colette Langos and Dr Mark Giancaspro undertook significant original research to develop this course and the response from the Defence Department to this first offering has been very positive.  The concept of ‘Operational Commercial Law’ as a discreet area of scholarly attention is new in Australia and Adelaide Law School is pioneering the development of this unique field.