Dr Nengye Liu participated in the 40th Antarctic Treaty Consultative Meeting (ATCM) held 22-30 May in Beijing, China, hosted by China Ministry of Foreign Affairs. The ATCM is the annual meeting for all parties of the Antarctic Treaty to discuss pressing Antarctic issues. Only consultative parties – parties that have demonstrated their interest in Antarctica by ‘conducting substantial research activity there’ – are allowed to take part in decision-making processes. This is the first time that China hosts the ATCM, which attracted a lot of attention both within and outside China.

Dr Liu attended this important inter-government negotiation as a visiting delegate of the Antarctic and Southern Ocean Coalition (ASOC), the only NGO observer to the meeting. Dr Liu followed various interesting discussions and caught up with numerous delegates from Chinese, Australian and many other delegations. 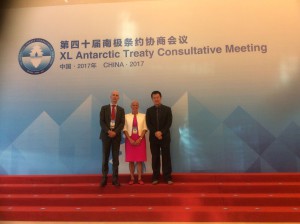 Following the ATCM meeting, Dr Liu was funded by the International Council for the Exploration of the Sea (ICES)/ North Pacific Marine Science Origination (PICES) and presented a paper on reforming China’s Marine Environmental Protection Law in Busan, Korea.

For Dr Liu’s view on China’s role in Antarctica, see his latest article on The Diplomat