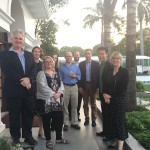 Over the period 20-23 June 2017, more than 40 legal experts, technical experts, government and military practitioners (acting in their personal capacities) and  academic researchers came together for the second MILAMOS workshop held in New Delhi, India.  This is the second in a projected series of nine workshops to develop draft Rules and Commentaries for the prospective Manual on International Law Applicable to Military Uses of Outer Space (MILAMOS).  Senior Indian National Government officials welcomed the workshop attendees to India, made formal addresses to the assembled experts and attended most plenary sessions of the workshop.

The MILAMOS project includes a wide range of international academic and governmental experts who are drafting a Manual that reflects the state of the current law applicable to govern military activities in space.  The Project is being spearheaded by the University of Adelaide, McGill University (Montreal) and more recently the University of Exeter and enjoys the participation and support of numerous other Universities and agencies across the globe (see MILAMOS primary website here).  Adelaide Law School members Professors Dale Stephens and Melissa de Zwart, Associate Professor Matthew Stubbs and Ms Stacey Henderson serve key roles in the project and participated fully in the Workshop. 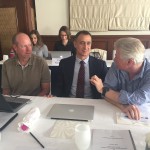 The MILAMOS members who were gathered together in New Delhi tackled several of the most foundational Rules (and their associated Commentary), as well as complex issues at the intersection of International Space Law, International Humanitarian Law and International Law on the Use of Force.  Issues relating to the prohibition of force and numerous issues relating to international humanitarian law were discussed in plenary.  Two University of Adelaide Law students, namely Ms Caitlyn Georgeson and Ms Chloe Evans provided key support as Rapporteurs of the proceedings as they unfolded.

This Workshop was very successful and built upon the solid foundation set in the first workshop held in Adelaide in February. The next MILAMOS Workshop will be conducted in the United States in October 2017.