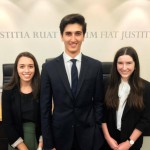 The team performed amazingly to place 5th out of a field of 37 teams from countries across the Asia-Pacific. The team was the highest placed Australian team in the competition and received the prize for the third best overall written submissions.

The problem question involved complex and cutting-edge issues of international law including the legality of mining resources located in outer space, preservation of cultural and environmental heritage on the lunar surface, the process of attributing liability, and the procedure for the determination of disputes ex aequo et bono. 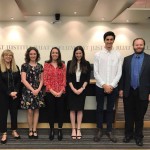 The team engaged in many months of detailed research culminating in the drafting of substantial written submissions. In preparation for the competition the team undertook intensive advocacy training and practice with local members of the legal profession.

The team and the Adelaide Law School would like to thank those practitioners who volunteered their time to assist as guest judges: Andrew Tarnowskyj and Patrick Lesson of Lipman Karas, Samantha Sisomphou of Griffins Lawyers, and Jenna Sorby-Adams.

The team was coached by Yvonne Whittaker-Rush and Mark Giddings.

Comments from the team members

Alison Jones
“Competing in the Manfred Lachs Moot provided a unique opportunity to test my advocacy skills whilst exploring new areas of international law. The benefit of participating in an international competition certainly outweighed having to prepare written submissions over the summer holidays and competing during the April break. It was fantastic to share this experience – I could not recommend it enough!”

Claudia Boccaccio
“Competing in the Manfred Lachs Moot was quite challenging, the nature of the laws of space and the problem itself demanded immense depth of research and analysis. It provided me with invaluable practical skills in legal research and strategy like no course in law school has. The knowledge gained and the friendships formed made the months of hard work truly rewarding — I would highly recommend it to all students.”

Nicholas Michalakas
“I never thought I could represent the Adelaide Law School on the international stage — being part of Adelaide’s Manfred Lachs Space Law Moot team gave me that opportunity. The Manfred Lachs Moot really developed my ability to strategize a case and advocate at the highest levels. Given our team and coaches, I would do it all over again.”