Talking about the Future of Antarctica in Adelaide

With support from the Adelaide Law School, Dr Nengye Liu travelled to Hobart, Tasmania in July, to speak at the ‘Depths and Surfaces: Understanding the Antarctic Region through the Humanities and Social Sciences’ Conference, which was convened by the Scientific Committee on Antarctic Research’s Humanities and Social Sciences Expert Group. Dr Liu delivered a paper ‘The European Union and the Conservation of Antarctic Marine Living Resources’. This is the final result of Dr Liu’s project, funded by the University of Adelaide’s EU Centre for Global Affairs in 2016. During the conference, Dr Liu also chaired a panel ‘Asia and Antarctica’.

Dr Liu was awarded an SA Community Grant by the National Science Week/Big Science Adelaide and organised a workshop ‘Re-imagining Antarctic Science: the role of History, Law and Politics‘ in August, at the Adelaide Law School. There were a number of multinational, interdisciplinary scholars from the SA Museum, ANU Fenner School of Environment, University of Technology Sydney, University of Brasilia and Adelaide and was well attended. A number of challenging issues regarding the future of Antarctica were discussed which raised interest from the audience. 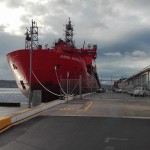