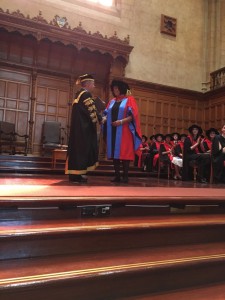 Andrea Mason was presented with an Honorary Doctorate during the University Graduation Ceremonies in September.

Ms Mason is the Chief Executive Officer of the Ngaanyatjarra Pitjantjatjara Yankunytjatjara (NPY) Women’s Council. She is a Ngaanyatjarra woman on her father’s side and Kronie on her mother’s side.

As CEO of the NPY Women’s Council she works across a 350,000 square kilometres of central Australia, supporting Aboriginal women and their communities in creating employment, supporting health and wellbeing, and tackling domestic violence and other social challenges.

She brings together Aboriginal and non-Aboriginal thinking, bringing respect and knowledge of local language, law and culture to bear on social change. She has established innovative social enterprises such as the Tjanpi Desert Weavers and other micro-businesses, teaching valued employment skills.

Andrea Mason grew up in Western Australia before her family moved to Adelaide, where she completed her secondary education. She spent two years in Canberra at the Australian Institute of Sport on a netball scholarship. 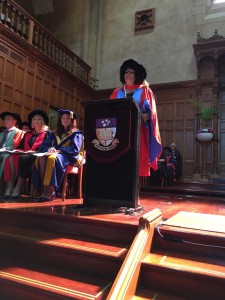 Andrea Mason presenting the graduation address at the ceremony

Her roles after law graduation included working as Coach in the Federal Government’s Indigenous Women’s Leadership Program; as Policy Officer in the Community Engagement Branch of the then Department of Family, Community Services and Indigenous Affairs; and as Relationship Manager for Reconciliation Australia. She joined the NPY Women’s Council in 2008, initially as a Senior Adviser and Project Manager, becoming Chief Executive Officer – her current role – in 2010. There she has had a profound impact on Aboriginal justice.

Andrea Mason was named Telstra Australian Business Woman of the Year last year for her work in employment creation, workforce planning, tenancy management and reconciliation action plans. This year she was chosen as the Northern Territory Australian of the Year and also appointed Co-Chairperson of the Prime Minister of Australia’s Indigenous Advisory Council.The University of Adelaide is proud to honour her contribution to Australian society through her commitment to Aboriginal and Torres Strait Islander justice.

This entry was posted in Events, News and tagged adelaide law school, Andrea Mason, Doctor of University. Bookmark the permalink.