Teaching and Research from the South to the North 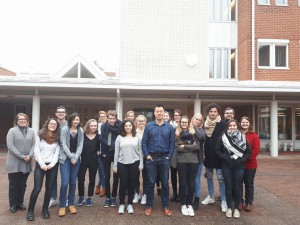 In September, Dr Nengye Liu was invited by the Australian Academy of Science to present at this year’s Theo Murphy Australian Frontiers of Science Conference – The Antarctic Frontier: Developing Research in an Extreme Environment. The Conference was held in Hobart 13-15 September, and attracted more than 40 top early/mid-career scientists across the country. Dr Liu delivered a presentation on how to regulate Antarctic bio prospecting.

During the mid-semester break in September, Dr Nengye Liu was invited by the Faculty of Law, University of Lapland to visit Rovaniemi, in the Arctic. During his visit, Dr Liu taught intensive courses on international and comparative law to students from several European countries. He also presented on China’s Belt and Road Initiative and its implications in the Arctic at the University of Lapland’s Arctic Center, a world leading Arctic research center. The interview with Lapin Kansa (People of Lapland), a mainstream Finnish Arctic media, about China’s Belt and Road Initiative, can be found here.

Dr Liu’s lead-edited book The European Union and the Arctic, published by Brill Nijhoff in its prestigious Ocean Development Series. As mentioned by law of the sea scholar Professor Robin Churchill in the Preface ‘This is the first book, at any rate in English, to deal exclusively and comprehensively with the EU’s interest and involvement in the Arctic’. The book has 13 chapters with 18 contributors from various countries and can be downloaded here.