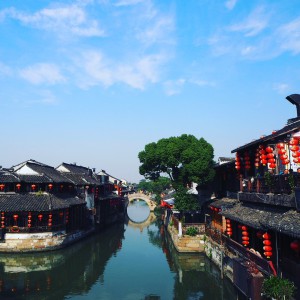 Sunday was a perfect day to visit the ancient water town of Xitang, an hour’s drive out of Shanghai, in Zhejiang province. The town, dating back to 770 BC, is well preserved and almost unchanged from 2000 years ago providing the perfect gateway to life in ancient China. The old town is built around picturesque canals, with narrow winding alley ways that feel completely different to the busy bustle we’ve come to be used to in Shanghai. There are 120 small lanes in total, all with small local street food vendors selling giant fragrant bowls of chili to clear the sinuses, insects on sticks and the Chinese favorite, stinky tofu (which tastes much better than the name implies!)

At the entrance to the old city, suspended above the water was a stage where traditional Peking Opera shows are performed. Most locals own their own barges to navigate the canals and will gather below to watch when a show is performed. We began our tour with a visit to the shrine dedicated to the local legend, the grain transport officer Jin, who was stationed in the town during a period of severe drought. Seeing the peoples suffering, he gave them his grain to alleviate their hunger without government permission, the penalty for which was death. Knowing this, he killed himself and the locals erected a shrine in his honour.

The city was historically involved in button manufacture. We got to witness firsthand the Xitang method of creating buttons from abalone shell. We also visited a number of traditional Ming and Qing dynasty houses in the area, tucked away with their beautiful gardens between the busy alleys. We spent the afternoon exploring the city and trying our hand at some traditional Chinese street food, before heading home to try some highly recommended Shanghai dumplings in the evening. 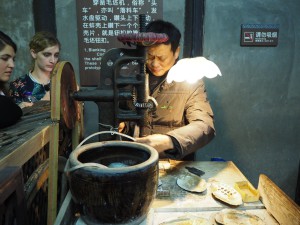 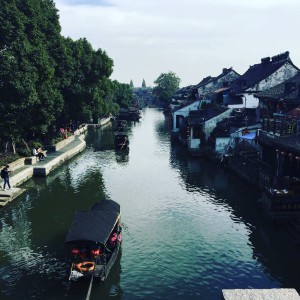 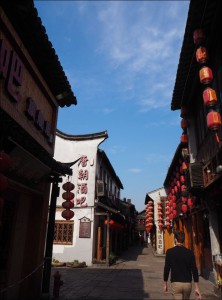 The other authors are Ali Mohammad Amin Vincent Rocca and Alexandra Dibb.