International Humanitarian Law in Action – from Ligertwood to Mosul 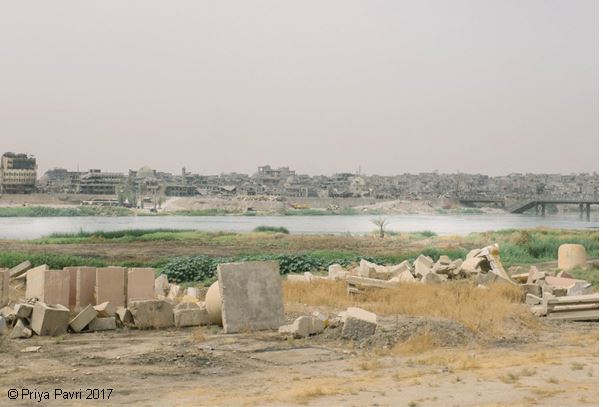 West Mosul – where the old city once stood

There are multiple ways that an Adelaide Law School degree can lead you to pathways you could not fathom when in the Law School. An Adelaide Law School graduate Priya Pavri (and former President of the AULSS) has spent the last 9 months in war torn Iraq dealing with the humanitarian crisis over there.  She has been engaged with issues of cultural property in Mosul, has treated wounded soldiers and has also assisted in delivering babies. Her experiences are described below.

I recall sitting hunched over my laptop in the depths of the Adelaide Law School library listening to my international law lectures – International Humanitarian law, Law of the sea, International Human Rights – these vast ideas and developing concepts seemed distant, far from the sounds of hustling North Terrace that creeped through the windows.

In the last 8 months while living and working in Iraq – international law has come to life. As the country manager for Cadus, a German emergency response NGO I have been confronted with questions of neutrality, proportionality, impartiality and independence. I have had to reconcile the impacts of proximity and the effects of armed conflict on a people, with the destruction of social infrastructure and cultural, historical and sacred institutions.

During the liberation of Mosul from ISIS, Cadus was one of only three international NGOs working with the World Health Organisation to provide front-line trauma care. We worked within the international humanitarian framework to provide trauma stabilisation points (TSP’s) that could treat injured patients as Iraqi and coalition forces fought to regain control over the city. The battle was bloody – thousands of people were injured in the cross fire by explosions, snipers and airstrikes. The tactics deployed ISIS were horrific. The human destruction and trauma the people of Mosul experienced under their rule is haunting. Our medical team was based 2-3kms from the front line. We moved as the front line shifted forward and back, and as need for medical care grew.

The willingness of ISIS to target humanitarian workers posed challenges for the humanitarian establishment – how can we reconcile the needs to simultaneously provide timely and effective trauma care to victims of the conflict, ensure the security of both staff and patients, and act in a manner consistent with humanitarian principles.

Critics flung accusations that TSPs like ours were ‘entirely embedded’ with the Iraqi forces, medical ethics were questioned and international humanitarian law challenged.

At July 17 as the Old City was finally retaken by Iraqi forces, the trauma response provided emergency medical care to over 17,000 patients, 73% of whom are civilians. Care was received by combatants from both sides of the conflict – medical ethics and humanitarian principles continued to prevail.

War, traditionally understood, and a rising number of armed conflicts against non-state actors are rapidly changing, as technology advances and groups like ISIS violently attempt to shatter our international institutions and norms.

But the humanitarian imperative is rooted at the heart of the work done my many organisations. The law taught in Ligertwood echoes to the furthest parts of our planet and in my opinion, continues to save lives.

Thanks to Priya for sharing her story.