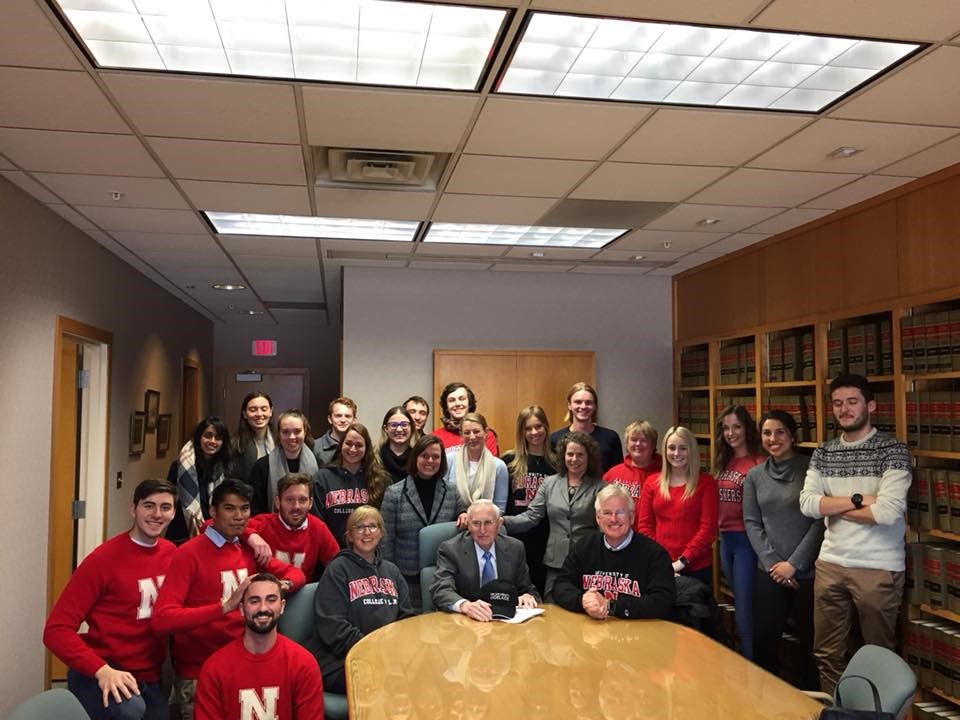 Following a hearty breakfast in the hotel lobby, we congregated by the front doors and stepped out into the freezing cold (– 10C) to load into the bus where our driver delivered us to our first stop of the day – the Nebraska Memorial Stadium. To our great enjoyment, we were greeted in true Russian style by a jovial Prof Jack Beard donning a ‘ushanka’ (traditional Russian “ear flap hat”) and military coat (see magnificent pics below).

In the foyer of the Memorial Stadium, the group enjoyed a few minutes of exploring the floor-to-ceiling glass cabinets filled with cherished trophies and other sports paraphernalia before being ushered into a small theatre to view the “Nebraska Football Experience” featuring the accomplishments of three Nebraskan Heisman Trophy winners, Johnny “The Jet” Rogers, Mike Rozier and Eric Crouch. The guided tour took us around the complex to see several special sports displays, the impressive temperature controlled indoor stadium, and included a walk on the pristine grounds of the outdoor stadium where students, Andre and Nick, challenged each other to a thrilling 100m sprint (Andre: 1, Nick: 0).

Our group departed the Memorial Stadium and following a brisk walk through the University grounds, we arrived at the Sheldon Museum of Art. We were warmly welcomed by a very knowledgeable art exhibition guide who did very well speaking to us despite battling the almost impenetrable wall of noise radiating from the hordes of excited school children. Our first stop was the ‘Sheldon Treasures’ exhibition which presented a selection of the gallery’s most well-known and valuable pieces, including artworks by Joseph Stella, Georgia O’Keeffe, Edward Hopper and Marsden Hartley. The next exhibition, ‘Donald Sultan: The Disaster Paintings’, starred a number of large pieces exploring modern industrial landscapes and their vulnerability in the face of natural and man-made catastrophic events. To finish the gallery tour, our guide walked us through the ‘Re-Seeing the Permanent Collection: The Long 1968’ exhibition commemorating the 50th anniversary of the 1968 worldwide political revolution. The exhibition featured a number of collections showcasing various artists’ skills in different mediums (photography, poetry, sculpture, etc.), including a lively wall of rock posters advertising events in San Francisco between 1966 and 1968, which members of our group admired from the comfy art gallery beanbags.

After a healthy dose of culture, it was time for us to meet the Honourable Senior Justice C. Arlen Beam, US Court of Appeals of the Eighth Circuit. We were directed into the judges’ chambers where we spent an hour or so listening to Hon. Justice Beam and supporting staff discuss the structure and roles of courts within the US Federal Court system. Hon. Justice Beam kindly took questions from our group and we all felt extremely privileged to hear first-hand of his fascinating history leading up to, and following, two appointments to federal judicial service by President Ronald Reagan (confirmed by the United States Senate in 1981 and again in 1987). We were all surprised to learn of his service in the Korean war and occupation as an agronomist prior to commencing a legal career. After gifting a University of Adelaide cap and mug (which he promised to wear and use with pride) we concluded our very special visit with a group photo.

Our final stop for the day was the stately Nebraska State Capitol. Some of the students boldly posed at the steps of the Capitol wearing matching Nebraska sweaters which, to our amusement, attracted the attention of a local heckler. Recovering from what must have been our first slight in Nebraska (quite possibly the first in Nebraska’s history – the locals really are that nice!), we made our way to the ground floor entrance. Our enchanting stroll along the dimly lit stone corridors was enhanced tenfold by a fellow student whistling the Harry Potter theme tune. The passage led us toward the bright and spacious Rotunda where, after a few minutes of marvelling at the stunning décor, a bubbly tour guide approached and directed our group around the building. The Norris Chamber, which historically held the Legislature in 1937 when Nebraska reformed its lawmaking system to the one-house Unicameral, was a particular highlight. So too was the Nebraska Supreme Court with its imposing Judges’ chairs and intricate 8,000-piece walnut ceiling cleverly designed to absorb sound and prevent reverberation.

The conclusion of the guided tour of the State Capitol brought us to the close of our journey of discovery of football, art, law and history – Nebraska style. We departed the State Capitol in very high spirits, excited for some well-earned rest and, of course, for the next round of unforgettable experiences this study tour will most certainly bring. 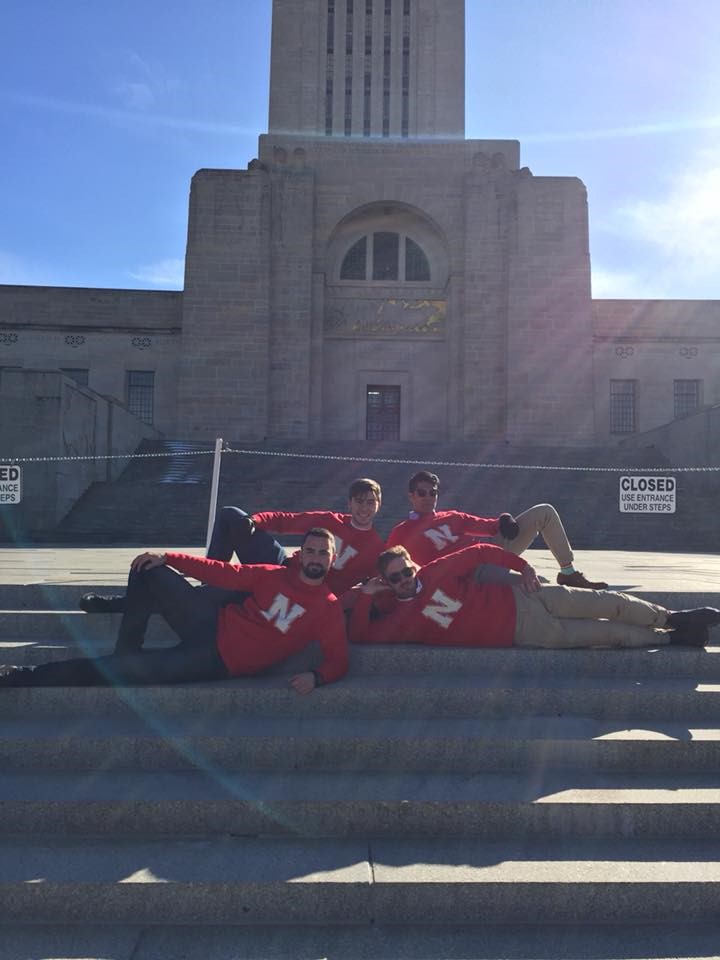 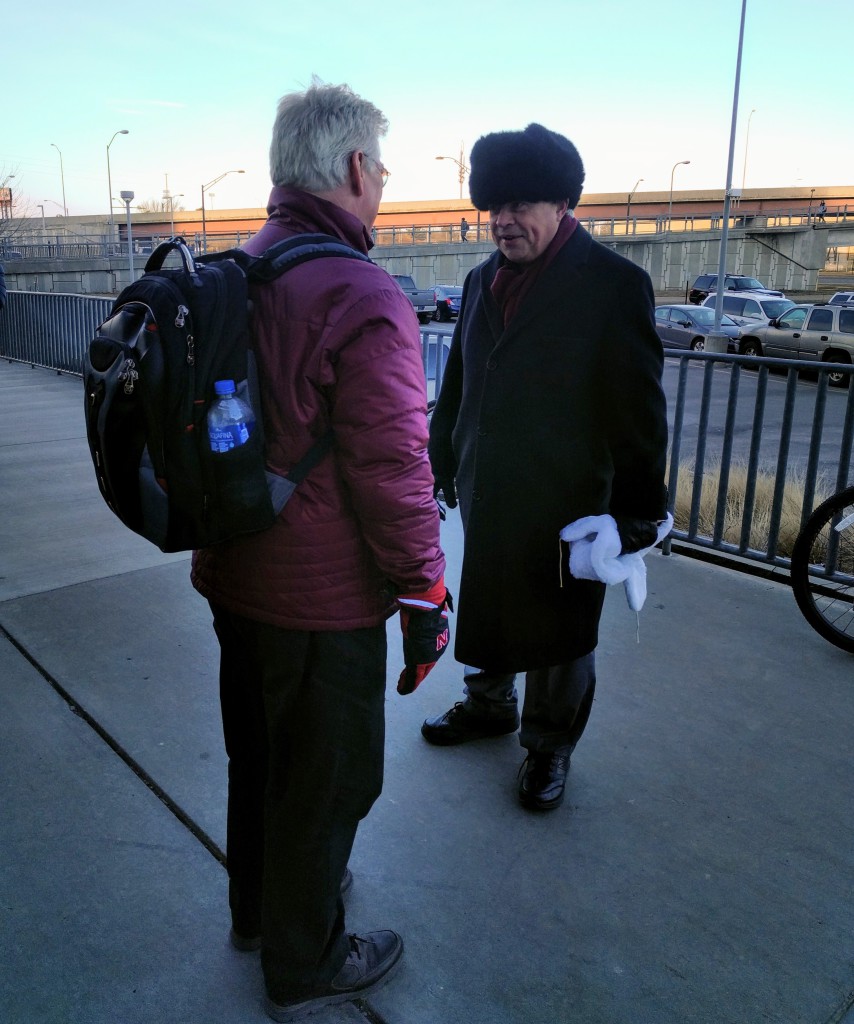 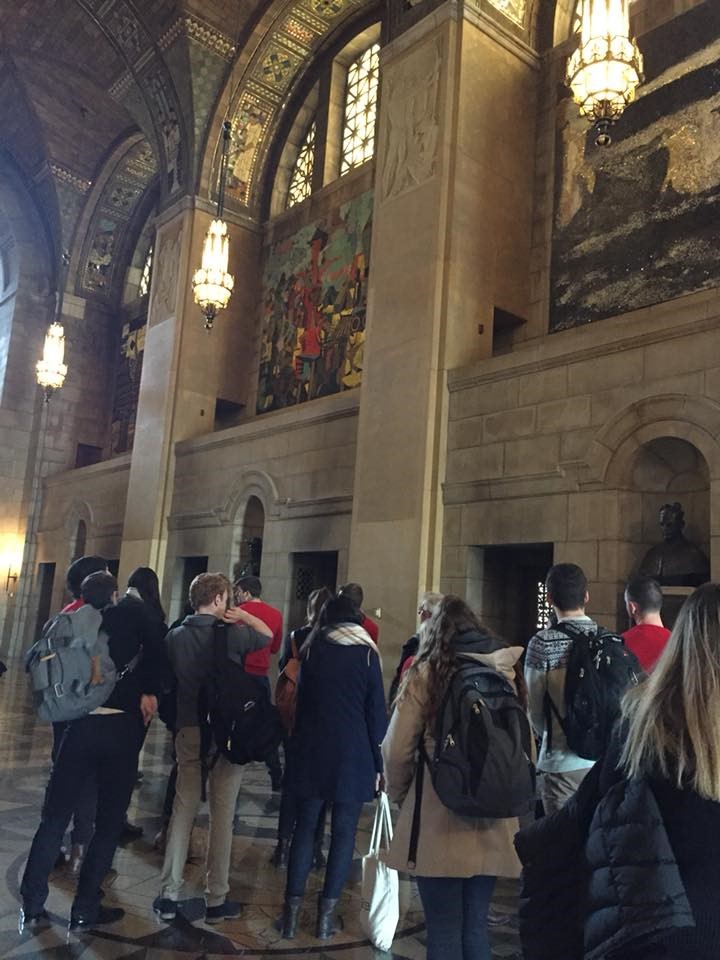 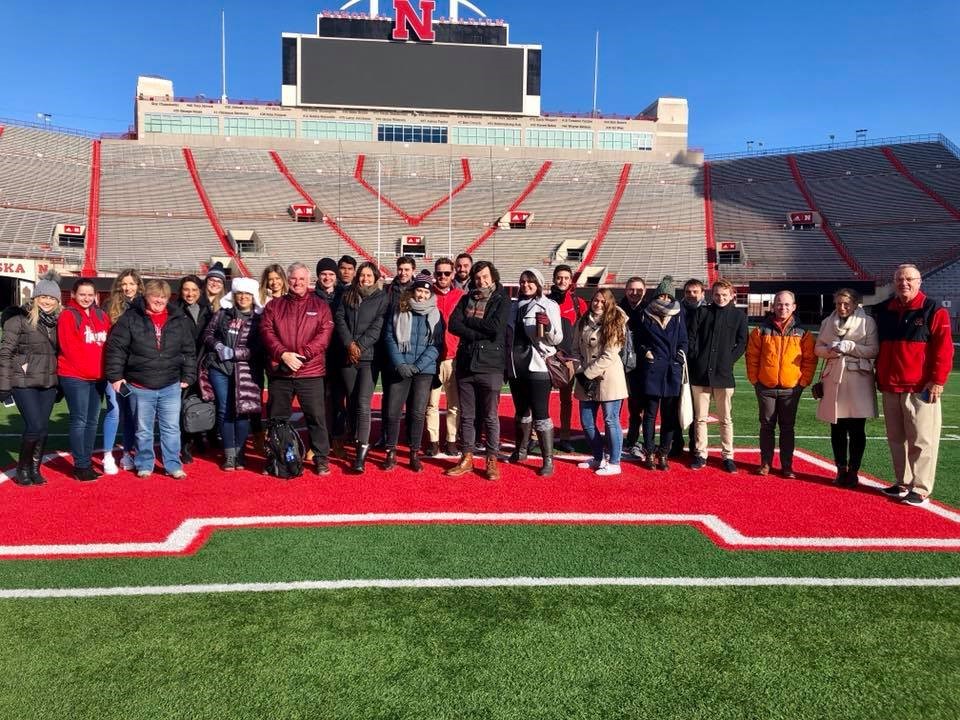