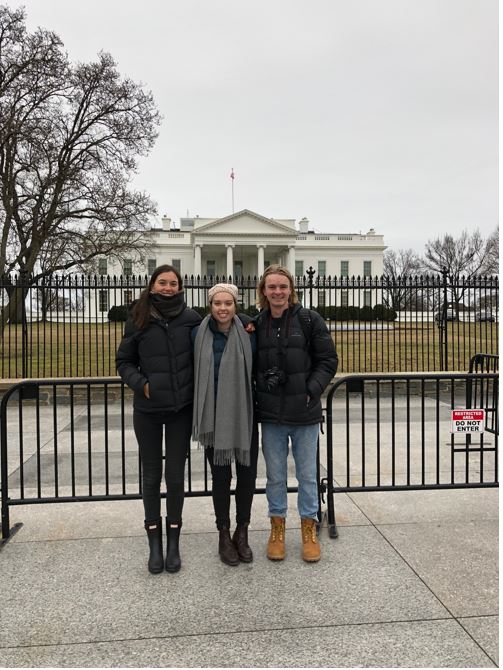 Alex, Lukas and Georgina outside the barricaded White House

Eager to make the most out of our first and only free day in Washington, we started off with a 6am wake-up call in order to watch the sunrise over the National Mall. Though it was a brisk morning in D.C., we ventured to the Lincoln Memorial where we were lucky enough to be one of the few groups there. We were very excited to capture some beautiful photos of the sunrise, the Washington Monument, and of course the commanding man himself, President Lincoln. Whilst wandering through the Mall we took the time to appreciate some of the more emotive memorials, such as the Vietnam Veterans Memorial, Korean War Veterans Memorial, District of Columbia War Memorial and the National World War II Memorial. These dedications had an unexpectedly profound effect on us as we reflected upon the great sacrifices of the United States and the allied nations who gave their lives for us. It was also eye-opening to experience the sheer patriotism of the United States first hand, allowing us to better comprehend the national pride that fuels this country.

Almost ready for some breakfast, we decided to take the long route home via the White House. We were surprised to see that the majority of the south-side was barricaded whilst the north-side was heavily manned by the Secret Service. Although intimidating, the Secret Service were very chatty; explaining to us the increased security and even giving us local lunch suggestions. Nonetheless, we still got the essential White House tourist picture. 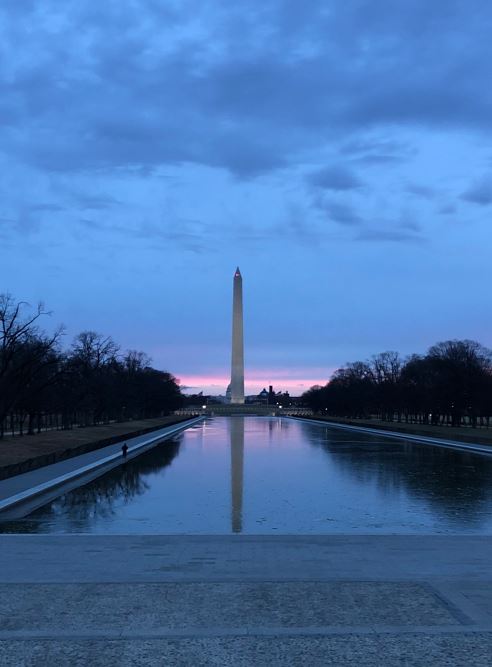 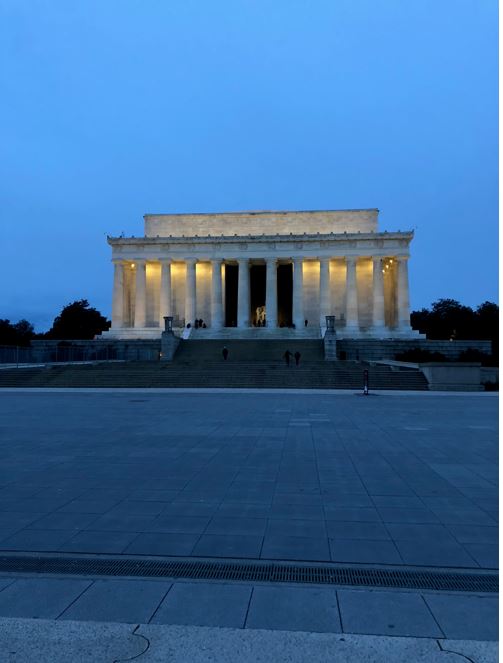 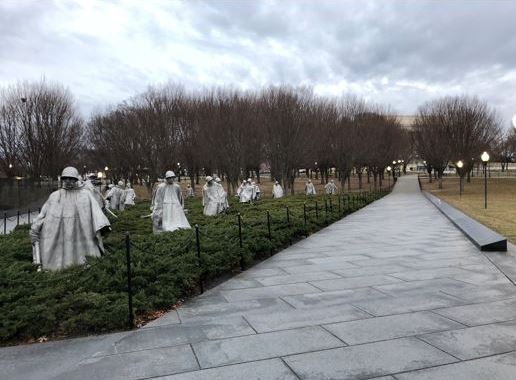 After a much needed coffee, we walked over to the Smithsonian Institutions in the snow which later, unfortunately, turned into rain. Gob-smacked by the immense number of galleries and museums on offer, we were faced with the tough job of narrowing it down to just two. However, the obvious choice was firstly the National Air and Space Museum. Here we were in awe of not only the fantastic aviation and aerospace displays, but also the rich history of American space exploration largely emanating from the Cold War. This was interesting to compare to Australia’s relative inexperience in Space. We also found the exhibition ‘Seeing into Space’, on the development of Astronomical instruments very informative. It allowed us to appreciate the genius that went into the evolution of essential astronomical tools such as; armillary spheres and the telescope, without which space exploration would never have been possible. Next we headed to the National Museum of Natural History, with high hopes of whale skeletons, rare gemstones and Egyptian artefacts. The museum did not disappoint with beautiful collections including the Hope Diamond and the famous human ancestor, Lucy the Australopithecus. 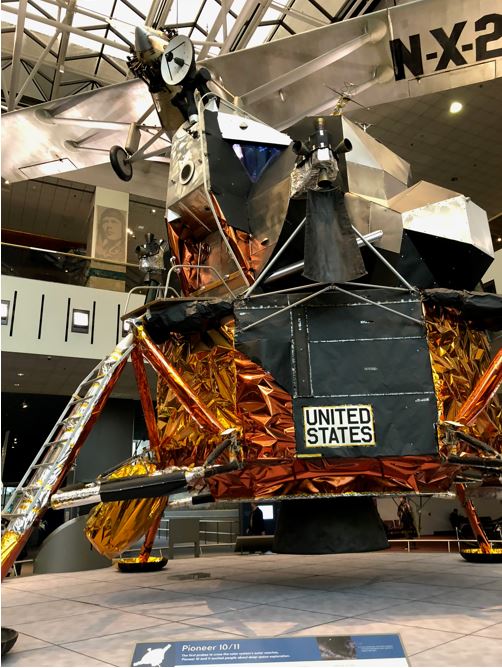 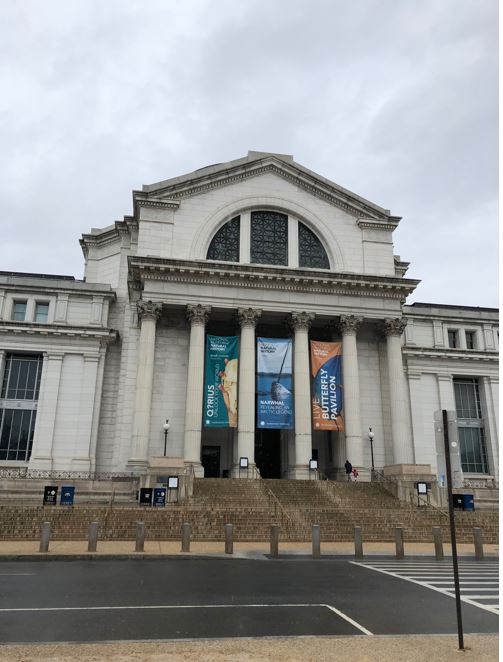 Hungry and wet after a long morning we utilised the Secret Servicemen’s suggestion of Old Ebbitt’s Grill for lunch. Old Ebbitt’s is the oldest restaurant in Washington founded in 1856 and was enjoyed by the likes of Presidents McKinley, Johnson, Harding and Roosevelt. We thoroughly enjoyed the opulent history of the establishment, as well as the food, and would highly recommend it to future travelers.

Ready to lighten our wallets we took the bus to Georgetown. Though the D.C. buses were certainly more tech savvy than those in Adelaide, with USB charging ports, we found the lack of bus numbers very confusing. Yet we easily found our way into some of our favourite shops, setting us up for a good afternoon. Though the rain began to seep through our jackets and cloud our vision, it did not dampen our spirits. However, it was not long before we made a much needed stop at Georgetown Cupcakes, one of the World’s most famous bakeries, thanks to reality TV show D.C. Cupcakes. Here we enjoyed a brief and delicious respite from the relentless rain before hitting the shops once more. 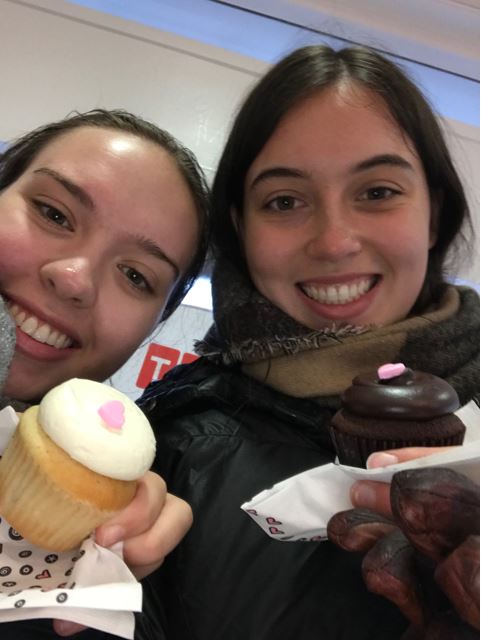 Tired after a long day, with our pedometers measuring over 30,000 steps, we grabbed a quick dinner and journeyed back to the hotel, excited to put our feet up. We, as well as the other students, had a wonderful day and truly believe we made the most of our free time in this beautiful city. Some of our friends even ventured to the Vegas Golden Knights v Washington Capitals ice hockey game, where Washington were unfortunately defeated 4-3. This sporting trending continued into the night for Superbowl Sunday, as the Eagles took on the Patriots, with a 41-33 victory. Writing this blog post we could hear the excitement and disappointment of fans as they watched the game. Though fatigued after a long day, we are incredibly thankful to have had this wonderful opportunity. We are less thankful for the fact we now need to iron our shirts and blazers ready for tomorrow, however we are sure that the great day planned will make it all very worth it.