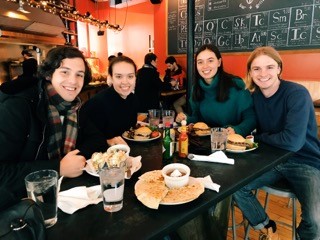 Whilst the sound of a ringing alarm set to 4:30am woke most tired Australian students who drearily dragged themselves out of bed with a hasty attempt to squeeze last minute belongings into their suitcase, two students slept safe and sound… the banging on their door and calls from reception didn’t disrupt their rest. Seemingly the sound of an alarm is not sufficient for the true jet lagged Aussie sleeping. In the end a desperate phone call from Professor Dale Stephens managed to wake the two students who, short of breath, finally piled onto the bus.

One final, rather competitive head count was performed. Evidently Law students are so creative they make a game out of the sheer necessity to number off so we don’t lose any travellers. We often start counting backwards now…

Sad to say goodbye to the extravagant monuments of DC, with the sun still yet to be seen, we set off for Ronald Reagan airport, on route to Boston! Home to the famous Harvard Law School, soon we would have the privilege to meet and learn from esteemed legal academics.

Much to the delight of a few hungry bellies, America has created a phenomenal invention deemed the Breakfast Taco. Clearly eggs and bacon should not be denied the joy of a soft shell packaging with guacamole and sour cream. Whilst an hour delay left some of us frustrated, day dreaming of the extra hour of sleep now lost, the resulting near empty plane brought smiles to most with the prospect of an entire row to rest on. After a few weeks travelling it is the small things and little wins like space to spread out on a seat, which feel like true luxuries.

Bussing to the hotel we were greeted by a picturesque scene little witnessed by Australians. Peering out of the bus windows the first glimpses of snow brought a sparkle to the eye of those first experiencing a true white winter. It was a beautiful afternoon to explore the town: catching snowflakes on our tongues and laughingly throwing snowballs. The prospect of a snowball fight was all too tempting, but quickly regretted once the fresh snow transformed to water seeping through the many layers of clothes aiming to keep out the cold chill.

As we explored the snow covered street it was difficult to resist taking pictures of the majestic scenery surrounding us at every turn. Whilst the local Bostonians busily bustled to and from work resenting the snow storm, like true tourists we were more than delighted. 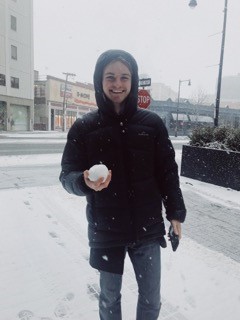 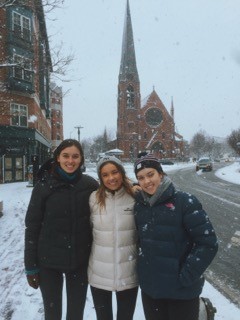 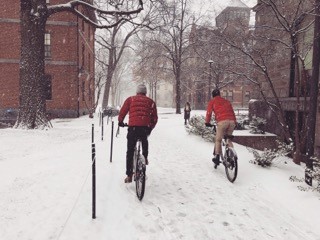 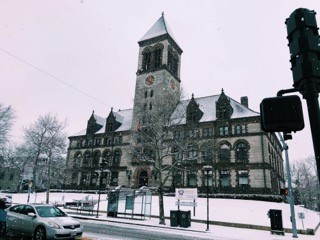 Harvard Law School has provided centuries of prestigious legal education. Established in 1817, Harvard has transformed countless students into esteemed graduates and leading generations on the legal frontiers. Harvard has some rather noteworthy celebrities in its alumni including 44th President of the United States Barack Obama and First Lady Michelle Obama.

But I wonder, did they ever brave the snow on pushbikes the way our University of Adelaide LLB Undergraduates did? Some of our more adventurous young gentlemen could not resist the temptation to pedal through the falling snowflakes for a snowball fight on the grounds of arguably the world’s most famous educational institution.

As the afternoon progressed the rain started to set in: it was time for coffee. Our hotel’s central location allowed an easy walk to the main street where various restaurants and cafes lit up as the sun diminished. Sitting in a small café I sipped my matcha latte. Hearing our accents, the shop owner asked where we were from and we launched into conversation about what we were doing in this lovely city and our amazing experiences so far, from Nebraska to Washington DC and now in our final stop of Boston.

Other students dared to set off in search of a famous hot chocolate joint. After absent-mindedly walking 2 miles in the wrong direction, and one or two swift subway changes thanks to the friendly, perhaps sympathetic locals, we finally found Max Brenner. Sipping out of the ‘hug mug,’ the soothing smooth chocolate slipped down our throats warming our entire bodies from the inside out, and we contemplated all that we’d experienced. 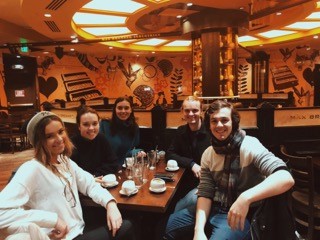 During our time on the study tour so far we have enjoyed the privilege of learning from a range of experts in their field and thus gained insight into a number of recurring topics, such as tackling international law issues surrounding the potential congestion of space due to debris, or the legality of cyber warfare from a national security perspective. Whereas in Nebraska we gained academic insight from Professor Jack Beard, and a military law standpoint from JAG officers, in Washington we heard about the more operational side of things from personnel at STRATCOM, and further the administrative process of those assisting Congress to combat things from a policy making perspective. It has been hugely rewarding to appreciate the nuances of how these pertinent matters interconnect and affect various departments.

After a truly breathtaking day, we now eagerly look forward to seeing what’s to come in our final few stops.

by Rachel and Sophie