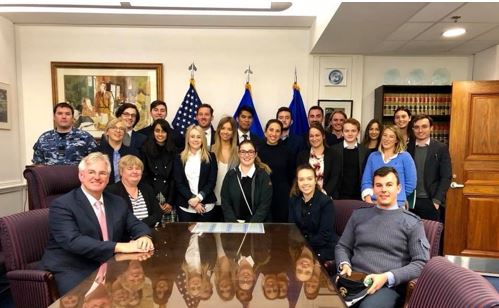 Our group with selected Defence delegates to the Pentagon

This morning had our group attend the National Geospatial-Intelligence Agency (NGA) in Springfield, Virginia. Not surprisingly, we had to surrender all phones and electronic devices upon entry, so we weren’t able to take many photos during the day other than out the front. 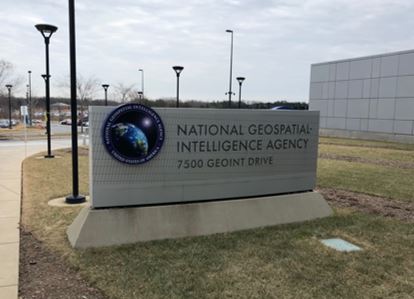 The morning was filled with a number of impressive presentations from members of the NGA. First and foremost was an explanation of the NGA’s mandate, its place in the intelligence community and the technology it employs to undertake operations. The NGA’s motto is “Know the Earth. Show the Way. Understand the World”, explained very coherently by Major Barney of the United States Air Force.

A particular highlight of our address was by Kristen who works as a senior policy advisor. Kristen’s personality, viewpoint of life and charisma is truly inspirational, and the entire group was engaged throughout her presentation. Her resonating career advice: careers are mosaics; never settle, always say yes. Kristen explained her journey before her current position at the NGA, including her engagement with teaching the Afghanistan people about the rule of law and the challenges involved with being the only woman in a crew of 13 men during her tour.

A current theme through all presentations was the NGA’s desire to develop algorithms that automatically detect changes in temporal satellite imagery. Having a computer detect changes in geological features or activities would drastically increase productivity for the NGA. The presenters also explained that that the NGA releases some of this information to the public, exampled by imagery of a collapsed bridge in Puerto Rico during flooding, and the construction of a drug-trafficking airfield in Honduras.

After a quick (18 minutes!) lunch, we were off to the Pentagon…

The Pentagon is equally as impressive and intimidating on the inside as it is on the outside. Signs prohibiting photography littered the car park as far as two hundred metres away from the entrance. Bulletproof boxes capable of withstanding gunfire, and allowing the return of gunfire, lined the entrances. A nearby German Shepherd police dog provided some brief emotional support, however it too was deadly, albeit slightly cuter.

The only permitted use of our phones was for a select area with a mock-up Pentagon podium (which you can see we made full use of), and we were later assured that any other unauthorised use would result in us never seeing our devices again. We were then greeted by some Australian and British counterparts to the US Military JAGs (Judge Advocate General), we were comforted by a sense of cultural familiarity. 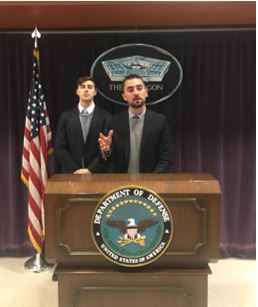 Riley Ingham and Nicholas Garbas at the Pentagon podium

Our tour guides, both Private First Classes in the US Military, were also first class in their uncanny ability to walk backwards whilst directing a large tour group. Of the many Pentagon facts, we were particularly interested by the fact that Pentagon staff consume tens of thousands of in-house Starbucks coffees and Subway sandwiches per day. After all, nothing says you are in the US more than being surrounded with assault rifles and fast food. Additionally, the hot-dog stand at the centre of the Pentagon was thought to be the real centre of U.S. Defense by the Soviets during the Cold War with its exact location often being the desired target of Soviet missiles. It was thereinafter dubbed ‘the most dangerous hot dog stand in the world’; a name it and the Pentagon staff has readily embraced.

The laughter halted with a sobering moment through the Pentagon memorial of the 9/11 attacks. As one of three affected locations, the moving memorial showcased the medals awarded to the victims, both civilian and military. The room was cased in a shiny aluminium interior, similar to the metal used on the Boeing aircraft that struck the building. The Private also explained how at the time, the affected side was under construction, meaning that there were significantly reduced personnel in the area than normal. We also learned that 50% of Pentagon staff still returned to work the following day – pretty incredible!

We also engaged in a meeting with senior JAG officers to discuss government objectives and concerns regarding national security and space operations. As noted by a senior officer, a single high-speed fleck of paint had sufficient force to crack a window on the International Space Station. Vulnerabilities such as these are also pertinent to GPS systems relied on by both civilians and the military, meaning progress on addressing these issues is a priority for the Pentagon and the U.S. government.

As for the rest of our discussions prior to our departure, that’s classified…J.