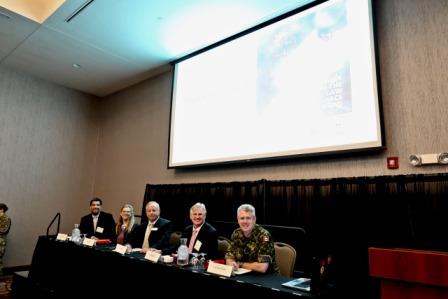 RUMLAE Directors Professors Dale Stephens and Melissa de Zwart have recently returned from Omaha, Nebraska where they participated in the Annual U.S. Strategic Command Advanced Operations Law Conference.  U.S. Strategic Command is responsible for U.S. Space, Nuclear and Cyber Defence and partners with the University of Nebraska – College of Law to host this Conference which covers topical legal issues related to the Command’s responsibilities.  This year there was a strong emphasis on the proposed new U.S. Space Force and how such a Force would be organized to meet current and future responsibilities. Papers were also presented on artificial intelligence, space proximity operations, the ‘weaponisation’ of social media, engagement with North Korea and developments in the law dealing with military space operations.  Professors Stephens and de Zwart participated on a Panel dealing with the Woomera Manual on the International Law of Military Space Operations (https://law.adelaide.edu.au/woomera/the-woomera-manual). The other members of this panel were Colonel Rob Holman (Canada) and Prof Chris Borgen (St Johns University – NY).  The Panel was chaired by Professor Jack Beard of the University of Nebraska (a founding partner Institution of the Woomera Manual project).  Issues covered during the panel presentation included methodology of legal analysis of space operations, the role of Manuals and ‘soft law’, the issue of assimilation of legal regimes and the place of state practice as a guide to legal interpretation of overarching treaty regimes under the Vienna Convention on the Law of Treaties.

View all posts by Bernadette →

This entry was posted in International Affairs, Research and tagged Research Unit on Military Law and Ethics (RUMLAE). Bookmark the permalink.