The Forum of Asian Insolvency Reform (FAIR) is a means for sharing and obtaining feedback in areas addressed by the UNCITRAL Principles for Effective Insolvency and Creditor/Debtor Regimes which are a distillation of international best practice on design aspects of these systems. In September 2018 the 11th Forum of FAIR was hosted by the Court of Justice of Thailand and the World Bank along with INSOL International. Adelaide Law School’s Professor Symes was invited to address the Forum on the causes and availability of insolvency processes and other reliefs available to over-indebted individuals in Australia. The Forum was attended by over 80 government ministries, judges, central bank officials, policy makers, practitioners and lenders.

This was the fourth FAIR that Professor Symes has been invited and attended and he was delighted to recognise participants from 17 Asian countries along with the UK, USA, Australia and New Zealand.  A number of the Asian jurisdictions do not have any personal insolvency law and were very attentive with Professor Symes’ subject matter.  Professor Symes was only one of three academics worldwide to be invited and one of four delegates from Australia. 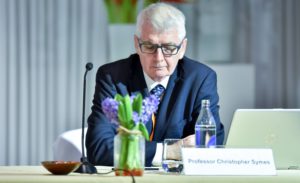