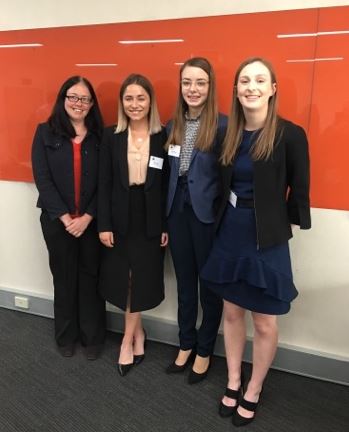 In the September break, we were lucky enough to travel to Melbourne to represent the University of Adelaide at the Sir Harry Gibbs Constitutional Law Moot.  The Gibbs Moot has been held annually since 2002, and draws teams from all across Australia.  In 2018, the moot was held at the University of Melbourne.  The problem is typically written by a pre-eminent member of the profession, including High Court judges, and 2018 was no exception.  Stephen Donaghue, the Solicitor-General for the Commonwealth, wrote this year’s problem.  The Gibbs Moot is a round robin competition, with four preliminary rounds and three final rounds for successful competitors.    Teams prepare both sides of the argument and are randomly allocated a side to argue in each round. 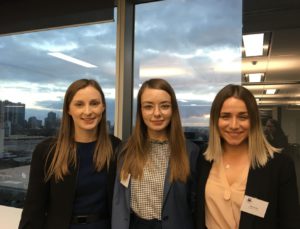 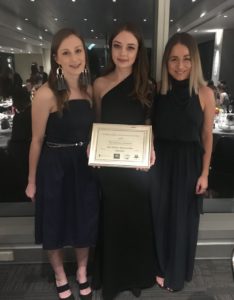 The problem was released about a month before the competition was held.  This year’s problem centred around the implied freedom of political communication and what constitutes a court of a state under s 77(iii) of the Constitution.  These issues arose in the context of a hypothetical Act being introduced by the Federal Parliament, which outlawed “fake news” during election periods and vested the “Truth Court” of each State with federal jurisdiction to convict for the offence.  We spent about three weeks madly researching and drafting our written memoranda, and practised our oral submissions throughout the entire period.  We were very fortunate to have some knowledgable guest judges come in at various stages of our preparation to provide us with feedback.  These judges included Sean O’Flaherty from the Crown Solicitor’s Office, Chad Jacobi from Edmund Barton Chambers, former Justice Tom Gray, former justice Catherine Branson and our very own Cornelia Koch.  We were coached by Dr Anna Olijnyk, who provided us with invaluable encouragement and support throughout the competition.

We flew into Melbourne on Friday night and madly began final preparations.   Conditions were less than ideal, but we settled with an ironing board for a lectern and commenced to bother the hotel staff for free printing in large quantities.  We arrived at Melbourne Law School on Saturday morning for two full days of competitive and spirited advocacy.  The Saturday started with an opening address from Dr Adrienne Stone, a well-known constitutional law academic, before sending us on our way to the preliminary rounds.  Two preliminary rounds were held on Saturday and a further two were held on Sunday, before a cocktail evening attended by all teams on Sunday afternoon.  The break was announced at the cocktail event, where teams who had made the break had to leave the open bar and free snacks to go back to Uni to prepare for the quarter finals.  We were lucky enough to make the quarter finals, and were knocked out by Monash University that night.  We got the chance to relax and explore Melbourne on Monday, and the finals were held at the Federal Court before Justice Bell of the High Court, Justice Tate of the Victorian Court of Appeal, and Justice Emerton of the Victorian Supreme Court.

We were fortunate to have a range of judges from different backgrounds, including from the Australian Government Solicitor’s Office and the Victorian Bar.  These judges gave us invaluable advice on our oral advocacy skills and our future careers in the law and elsewhere.  One of the highlights of the competition was the Gala Dinner held on the Monday night, after the grand final.  This was attended by all judges of the grand final, and the closing address was made by Stephen Donaghue SC.  Between champagnes and panna cottas, we found out that we had been awarded the best written memorandum for the defendant at the closing gala, which was a welcome reward for our hard work.  We all agree that one of the best parts of the weekend was getting to know teams from other universities.  There were 17 other universities in attendance and these teams provided a good support network throughout the competition.  We mooted against the eventual winners, the University of Sydney, in the preliminary rounds.

We strongly encourage anyone with an interest in constitutional law and oral advocacy to consider the Gibbs Moot in coming years.  It was a challenging but memorable experience, which we regard as one of the best experiences we’ve had in our degrees so far.