The South Australian Law Reform Institute, based at the Adelaide University Law School, has completed its latest report, ‘Surrogacy: A Legislative Framework: A review of Part 2B of the Family Relationships Act 1975 (SA)’.  The Report has been presented to the Attorney-General, the Hon Vickie Chapman MP, and was publicly released on 15 November 2018. 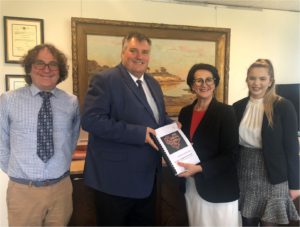 Dr David Plater, SALRI Deputy Director, outlined that the framework which SALRI has recommended is the most effective and appropriate to recognise and respect the interests of all parties, but crucially to protect the best interests of a child born as a result of surrogacy. Dr Plater reiterated that this must always be the primary or paramount factor of any scheme

Professor John Williams, Director of SALRI, noted that this had proved a major reference into a complex and sensitive area raising legal, ethical and medical issues and that SALRI has drawn on extensive research and wide consultation, building on the valuable work in this area of the Hon John Dawkins MLC of the South Australian Legislative Council and others. 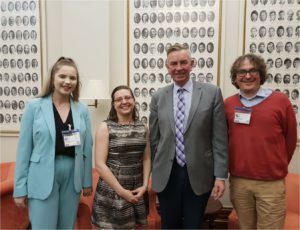 Professor Williams expressed his gratitude for all interested parties who contributed to this important reference and who shared often deeply personal account of their experiences of the present law.

Professor Williams noted: ‘This reference depended on individuals sharing some of the most challenging and emotionally intense aspects of their lives and relationships with a law reform body. We are deeply grateful for the trust participants placed in us, and for their courage to share their experiences and develop practical options for law reform in this sensitive area.’

Professor Williams also expressed his thanks to Dr Sarah Moulds of the Adelaide Law School and Ms Anita Brunacci, a family lawyer, and the Adelaide University Law Reform class for their valuable contributions to the Report.

The work and research of the Law Reform class proved especially important to the Report.

Madeleine Thompson, a student from the 2017 Law Reform class, was involved in the project as a researcher and co-author.

‘In 2017 I became involved in SALRI’s work on surrogacy as an undergraduate in the law reform class. As part of my studies I prepared a report which detailed the amendments that were made to the Family Relationships Act 1975 (SA) in relation to surrogacy in 2015 and 2017. From my research, it became really apparent that there were clear problems within the legislative approach to surrogacy in South Australia. I was lucky enough to be taken on by SALRI in March this year when it received the surrogacy reference from the former Attorney General. I have had the pleasure of being involved in the consultation on this project and meeting many interested parties. I particularly enjoyed meeting intending parents and surrogate mothers who had real experiences with the law on surrogacy in South Australia. I found that when speaking to intending parents and surrogates that the real practical issues within the current legislative framework were highlighted. I have really enjoyed the opportunity to take part in this reference and to see real positive movement towards a more workable solution for intending parents and surrogate mothers in South Australia.’

The Attorney-General has expressed her support for SALRI’s work and has welcomed the Report and tabled a draft Surrogacy Bill reflecting SALRI’s recommendations in Parliament on 15 November 2018.

The State Government is inviting comments and feedback on both SALRI’s Report and the draft Bill via the Government’s YourSAy website (https://yoursay.sa.gov.au/decisions/draft-surrogacy-bill-2018/about )

Parties can have their say on the recommendations in SALRI’s Report and the draft Bill by: