Wednesday, or ‘Hump Day’ to some (not me) started off well, my third consecutive wear out of my white business shirt meant I was in need of some express laundry services. After making my way through four different hotel staff I was finally able to secure some much-needed suds for my overworked business wear.

With the shirt matter resolved it was time to feast, but with only five minutes remaining the other interns departed for work and I was reduced to speed eating my breakfast of two poached eggs, five pieces of bacon and the cereal abomination I create out of cheerios and rice bubbles.

Unsurprisingly, the commute to work was once again packed – this is not necessarily a bad thing, those who loathe walking will be comforted to know that the force of fellow passengers pushing you onto the metro negates the need for any physical movement, instead you just simply glide in. Unfortunately, I enjoy walking and as a man above six foot, my head made unwanted contact with the railing above. However, this was not my first rodeo, the man smiling in the picture below is not the same man from a week ago, for that man attempted to leverage his entire weight on his umbrella to prevent himself from falling, breaking the handle of said [hotel] umbrella – gone but never forgotten (see handle below). 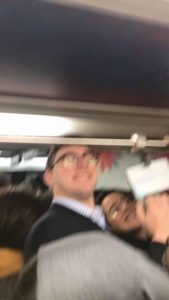 Pictured: Nicholas supporting Georgia on the metro as his umbrella could not. 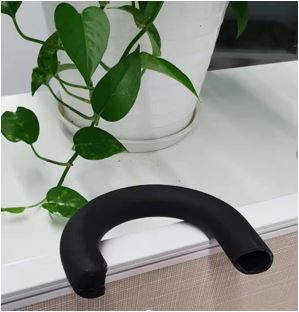 Pictured: The umbrella handle that could not handle the weight of its owner – rest in pieces.

It felt like it was just going to be one of those days, where no shower was cold enough, nor any percolated coffee strong enough to pull you out of some ‘Hump Day’ blues. However, as we stepped out of the underground, we found the sun staring back at us, a sight we had not seen for perhaps a week, or more, I felt my day brighten (literally and figuratively) with a sense of renewed purpose. At that moment

I realised that there was this entire life behind things and this incredibly benevolent force that wanted me to know there was no reason to feel blue.

The work was familiar, a few reviews of Chinese-English translations that the Associates had prepared earlier; all were written to an impressive standard, especially when considering that the authors were not native English speakers. Whilst most of my team had left on a team-building exercise in Thailand, I was still assigned a variety of tasks encompassing Comparative law, International law and Corporate law. It was stimulating to deal with matters that directly or indirectly related to topical affairs in the news, as well household-name companies which had operations in China. 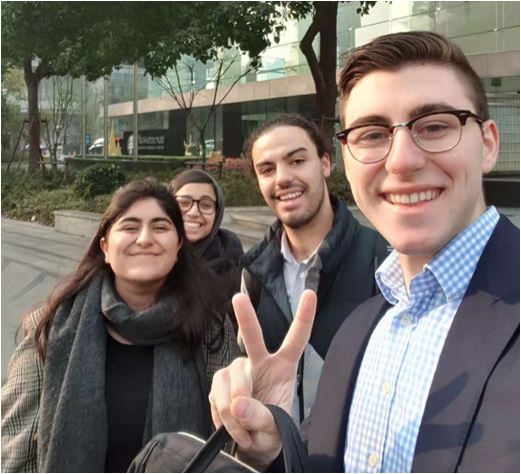 Pictured: The sun and Behshid, Sanah, Josh and Nicholas who are enjoying it. 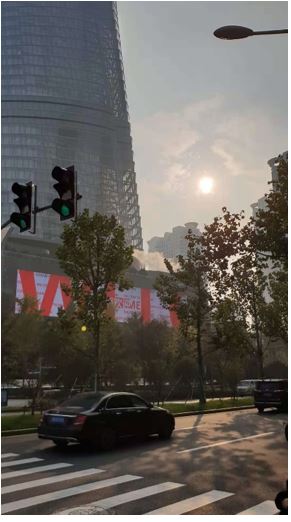 Lunch was shared between myself and my team consisting of Peter, Elena and Holly, it also featured a first-tasting of marinated Pig’s Ears – the experience was unique, however, the gamey texture made me question if they benefited the pig more than my culinary experience. After lunch, we stopped for what had become a customary Iced (Bing) Latte before returning to work. Notwithstanding the caffeine intake, many of the associates often take a power nap after lunch before they continue their work – a handful would remain there until well into the evening. 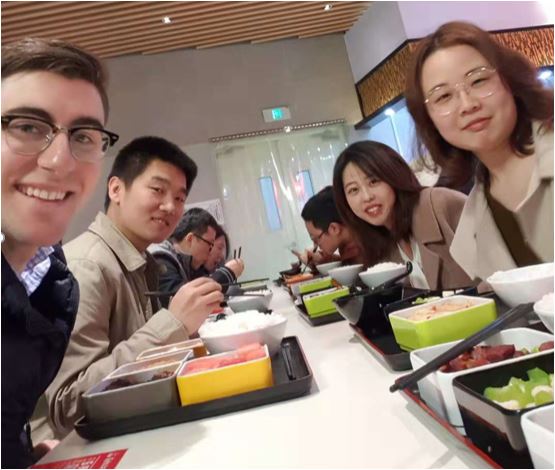 Pictured: The team of Peter, Nicholas, Holly and Ena.

For me, I held a greater level of physical tiredness than mental tiredness, the muscle soreness and ‘carpet burn’ from Monday’s dodgeball game with other expats highlighted the fact that the statement ‘no sliding on the artificial lawn’ was more of a rule than a suggestion. As the day ended, and with my umbrella still broken, I decided to skip the customary group/family dinner and prepare for another unique, hopefully sunny day.

URED: Josh, Sanah, William and Nicholas at Do