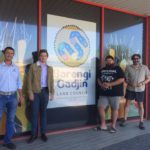 Over summer I spent six weeks interning at Barengi Gadjin Land Council (BGLC), which is located in Horsham, in rural Victoria. This internship was set up by the Aurora Internship Program (www.auroraproject.com.au) which offers internships in the summer and winter breaks.

Initially I was admittedly apprehensive about how I would manage in a rural area, having grown up almost exclusively in Adelaide. I very quickly adapted to life in Horsham though (BGLC had moved from their previous location in Wail just weeks prior to my internship), and the laid-back nature of the town allayed any stress that I had leading up to living there. As someone from the city it became clear to me pretty quickly that life in a rural town runs on a different schedule to that of a city, even one as small as Adelaide. I would strongly encourage interns from metropolitan locations to put their hand up to be placed in a rural location – it gives you the chance to see a very different side to work done in this area, and to help out at organisations that really need the support with some of the most passionate people in this field that you could possibly meet.

Most of my work at BGLC was law related in one way or another, and along the way I was always able to chat to employees of the Land Council in various areas, who often offered insight into the work I was doing. From spending my time doing legal research, to writing up case notes and briefs on reports, and even attending a native title claim meeting regarding Gariwerd, (a spiritual place in the story of Bunjil, the Great Ancestor Spirit) I was given a hands-on and practical opportunity to experience what working in this field of law would be like. I was also taken out ‘on Country’ by one of the BGLC staff members, where I was able to see some of the practical non legal work the Land Council carries out and hear stories from Traditional Owners about their history.

My understanding of this area of law grew significantly. I had previously spent probably around a month over the last three years of my study looking at native title, and that generally included reading specific parts of Mabo [No 2], the Wik Case and learning about extinguishment and recognition of native title through Australia’s law of property. Being in Victoria was immediately a new experience with regard to native title legislation, as unlike South Australia, Victoria has what is known as the Traditional Owners Settlement Act 2010 (Vic) (‘TOSA’), which allows native title claims to be settled out of court. This legislation also offers significant benefits which aren’t offered through the Native Title Act 1993 (Cth) (‘NTA’), often in the form of compensation. Importantly though, if a claim group has native title recognised through the TOSA, they are unable to then claim through the NTA. As such, many claim groups in Victoria opt to gain recognition first through the NTA, then to seek compensation using the TOSA. This legislation does not come without criticism however, and when given the opportunity to speak with clients and lawyers I was presented with a myriad of differing opinions on the effectiveness of the TOSA and how it interacts with the NTA.

A specific aspect of native title legislation that I became very aware of through this internship is that of the inability of the legislation to act for those who are unable to reach the threshold for recognition required in the NTA. This can be for numerous reasons, not least of which is the ongoing impact of colonisation through displacement, especially during the Stolen Generations. As a result of this, many Indigenous Peoples are unable to prove their continued connection to a specific area, often because of an inability to collect the evidence needed to reach the threshold. It was a common theme through my research to find works of authors bringing attention to this issue, and in speaking to various people around the Land Council in varying capacities, I became more aware of this.

In terms of how this internship has impacted my future aspirations, I can easily say that it really affirmed my reason for beginning my Law Degree at the Adelaide Law School in 2016. My reasons then were to be able to eventually practice in an area where my studies could be put to use helping people in underfunded areas, and to be able to bridge the gap between the legal field and communities who struggle with representation in that field, Indigenous or otherwise. The biggest thing I learnt from speaking with clients and Traditional Owners was the importance of legal professionals being able to appropriately communicate matters to their clients. This gap between clients and legal professionals often otherwise exists, but from what I understand from speaking to various people is overly prevalent in the Indigenous sector.

I would like to thank Michael Stewart, for supervising my placement in Horsham and for giving me some fantastic opportunities to travel while interning at BGLC, Stuart Harradine, for taking me out ‘on Country’, Brett Harrison and Mick, for always allowing me to ask questions relating cultural issues I didn’t always understand from just reading reports, Robert Fry, and Janine Coombs, directors of BGLC who I was able to have some great conversations with around culture and ongoing work in this field. I would also like to thank Ally McAlpine and Daniel Kelly at First Nations Legal and Research Services in Melbourne for supervising my placement from a distance.

I would strongly recommend that anyone with an interest in working in the Indigenous sector from a legal perspective consider an Aurora Internship in order to better understand from a practical point of view how the legal system operates. This internship met and exceeded my expectations of giving me the chance to learn from some incredible people what more can be done from the standpoint of law in this area.

I would also like to thank the Law Foundation of SA Inc for their financial assistance. Such assistance is vital for students undertaking internships outside of Adelaide.