Should I make a note of that? 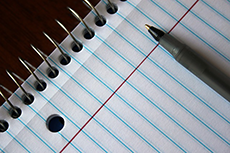 The next time you participate in negotiation or decision-making or even a conversation, be sure to make a record of it. It could protect both you and the University.

We often jump from one thing to another in the course of the working day.  As a result it is often easy to overlook, forget or not have the time to make written notes of actions, decisions and undertakings.

Why is it important to keep a record?

Making a record of a conversation or meeting may seem tedious at the time, but it may prove a vital resource if a dispute about what was decided arises. A dispute could occur long after a contract has been signed and having the ability to go back and see what was recorded at the time can be a valuable aid to resolving a disagreement. This protects both the University, and you as the person who has negotiated the contract on behalf of the University.

When should I make a note?

In contract negotiations, it is vital to make notes of phone or face-to-face conversations with external parties. The notes should be written up as the meeting or discussion is in progress or shortly after, so that a timely record is made.  Notes should not be re-constructed days, weeks or months down the track when it is obviously more difficult to recollect.

What should be included in the notes or record?

Notes should include details of those present, date and time, subject, what was discussed and agreed, and any actions arising. Preferably the notes should be placed on the formal HPRM file to evidence what was said and agreed, not only as a matter of corporate record, but also if there is a need to re-visit the verbal exchange should there be differing opinions about what took place.  If a colleague is present at the meeting, it can help to get their take on your notes as an accurate record of what was discussed and decided.

If you would like further information about record keeping please refer to the Records Management Handbook or contact the Legal and Risk Branch.