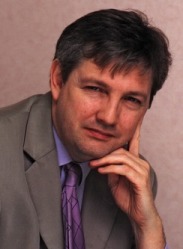 On January 28, 1813, Jane Austen received her copy of the book that she called her “darling child”. Getting Pride and Prejudice into print had not been an easy task – though it would make Austen her fame, if not her fortune. As for the story itself, at one level it is a classic girl-meets-boy love story; at another, it is inspiring because of the charm, spirit and wit of Elizabeth Bennet and the way in which Darcy transforms his character.

In this entertaining talk, Tim Bullamore, publisher of a recent book to mark the bicentenary of Pride and Prejudice, will look at the past, present and future of Jane Austen’s “darling child”.

Tim Bullamore, editor and publisher of Jane Austen’s Regency World magazine, is an award-winning journalist whose work has featured in the Daily Telegraph and The Times in London, the Sydney Morning Herald in Australia, and The New York Times in the US. He has lectured at City University, London; Cardiff University, Wales; and Columbia University, New York. From 2007 to 2010 he was a Visiting Fellow at the University of Bath, and last year took part in a residency at Haverford, a prestigious liberal arts college near Philadelphia. He often speaks at Jane Austen events worldwide.