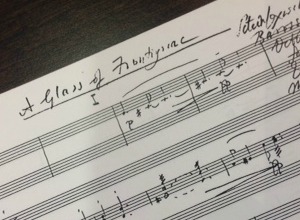 The Elder Music Library is currently featuring a mini-exhibition showcasing the work of Sir Peter Maxwell Davies (1934–2016), British composer, Master of the Queen’s Music 2004–2014, and Composer-in-Residence at our very own Elder Conservatorium of Music, 1965–66.

Known as ‘Max’, Peter Maxwell Davies was a close friend of noted Australian composers Richard Meale and Grahame Dudley – and had a significant impact on the artistic development of Ross Edwards and Graham Hair.

Max was a prolific composer, working in a wide variety of genres. One of his seminal works Eight Songs for a Mad King, with libretto by Australia’s Randolph Stow, was a central piece of the 1980 Adelaide Festival.

From 1971 he resided in the Orkneys, but maintained close links with Australia, and Adelaide in particular – composing several works for Grahame Dudley and the Elder New Music Ensemble to perform at both the Barossa and St Magnus Music Festivals.

The mini-exhibition features a display of published scores and recordings of Max’s works in the Elder Music Library, as well as facsimile manuscripts of A Glass of Shiraz (dedicated to Peter and Margaret Lehmann) and A Glass of Frontignac.

The exhibition runs until the end of April 2016. For more information on Sir Peter Maxwell Davies or the exhibition please contact the Elder Music Library on 08 8313 3686 or at: music.library@list.adelaide.edu.au.