I had a long chat with one of the students the other day about rotation matrices. They had come up in the Engineering Physics course called Dynamics as a way of finding the components of vectors relative to rotated axes. He had some notes scrawled on a piece of paper from one of my MLC tutors, which regrettably were not actually correct for his situation. I know precisely why this happened: rotation matrices are used in both Dynamics and Maths 1B, but they are used in different ways (in fact, there are two different uses just within Maths 1B!). It’s high time I made an attempt to clear up this confusion, especially since three more students have asked me about this very issue in the last week! 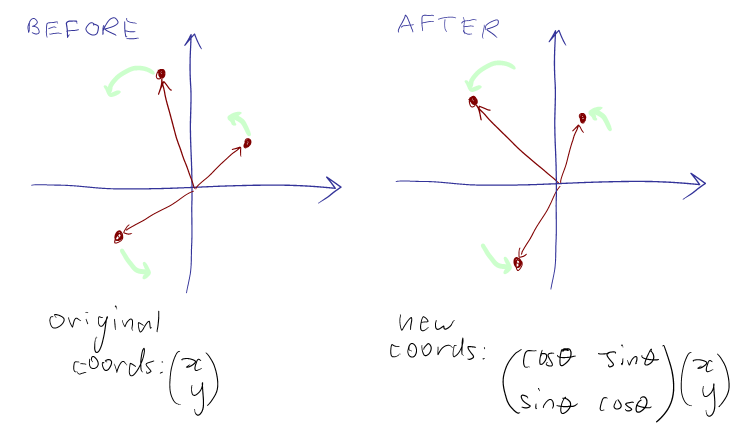 One reason this works is because multiplying a matrix by your standard basis vectors of (1,0)T and (0,1)T gives you the first and second columns of your matrix respectively. But multiplying by the matrix has the same effect as the rotation transformation, so to figure out what these columns actually are, all we have to do is rotate the points (1,0) and (0,1). If you do this, then because of trigonometry, you get the two points (cos θ, sin θ) and (-sin θ, cos θ), which are indeed the columns of the matrix. 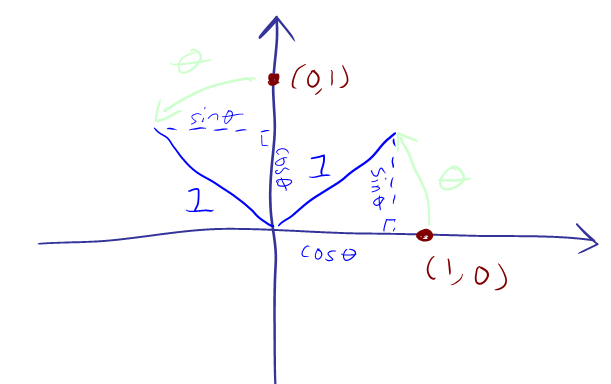 So now we have that a rotation matrix has cos θ on the main diagonal, sin θ in the bottom left corner and – sin θ in the top right corner. And it tells you where a point moves to under a rotation of θ anticlockwise. (It’s worth noting that it also works perfectly well on the components of vectors imagined as arrows.)

The problem is that over in Dynamics, a rotation matrix does not look quite like this! In particular, the minus sign is in the opposite corner. Why? 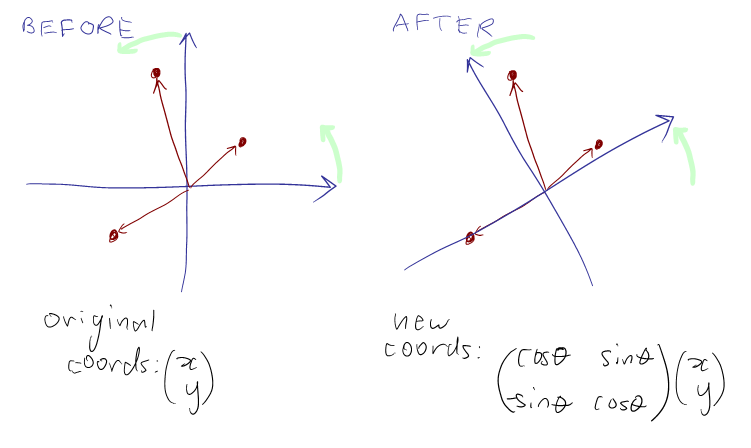 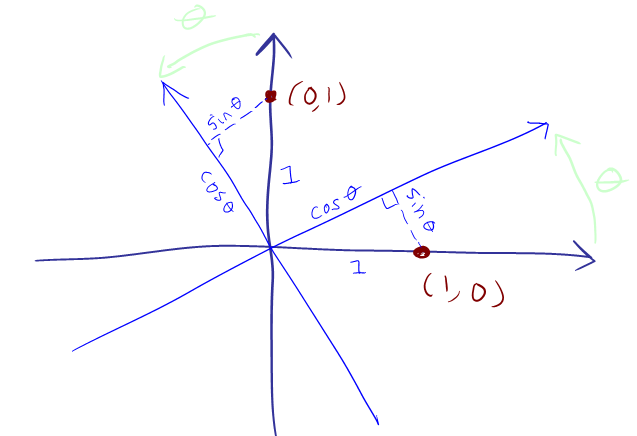 You may notice that this is precisely what the coordinates would have been if you did rotate the points themselves, but in the opposite direction to the original rotation matrix. This makes sense. If you turn your head to match the new coordinate axes, then this is precisely what has happened. Basically, if you rotate the coordinate axes one way, the points “move” the other way relative to the axes.

And this would be the end of the story, except that in Maths 1B you also rotate coordinate axes, and yet the rotation matrix is somehow still not the same as the one in Dynamics! Why?

Did you notice what happened there? In order to create an equation that described the same curve relative to the new axes, I had to begin with the new coordinates and transform them into the old coordinates. Let me repeat: I had to go from new to old. The coordinate transformation matrix in Dynamics goes from old to new. To go in the opposite direction I have to have the minus in the opposite corner. 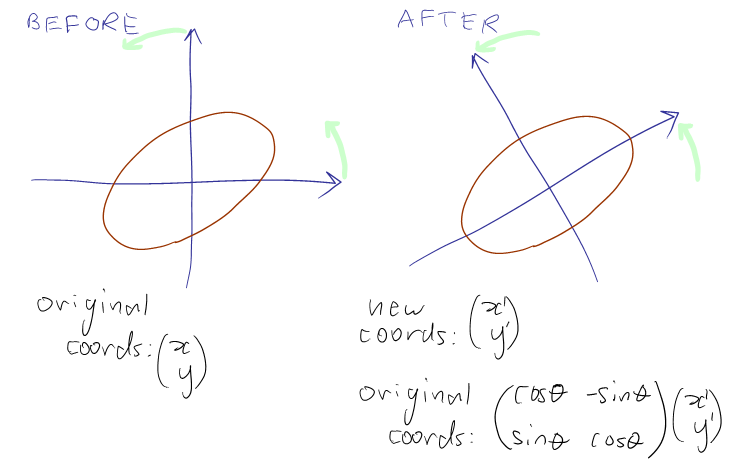 I’m glad we cleared that up!

This entry was posted in Being a good teacher, Other MLC stuff, Thoughts about maths thinking and tagged Drop-In Centre, maths, physics. Bookmark the permalink.