Every semester I talk to students about what the absolute value does to the graph of a function. Basically, the graph of y = |f(x)| is the same as the graph of y = f(x), but with all the bits below the x-axis flipped to be above the x-axis. I’ve always simply drawn some graphs and then drawn the flipped-over bits in a different colour. Like this: 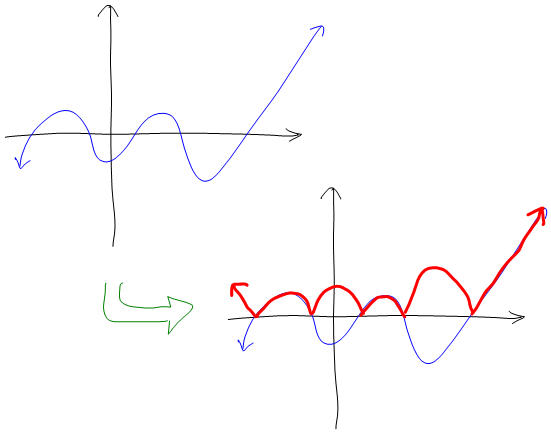 But this morning I read a blog post from Shaun Carter (which unfortunately no longer exists) and I realised I had fallen down on my physical manipulatives game. Shaun created a paper-and-glue thingy to physically flip the graph over, which I was most impressed with.

Thinking about it later, it occurred to me that it wasn’t the sort of thing I could do on the fly in the Maths Learning Centre. It involved tracing the graph multiple times and cutting and pasting, and basically would be way too fiddly for me to use on the fly when a student was confused about this idea. I wondered if there was a way to quickly construct such a thing in a few seconds.

The other problem with it is that the original function is obscured in the foldy-thingy. The paper moving over makes it seem a bit like the old graph vanishes to be replaced by the new one, but really all the up-parts are still there the same as they were before.

And then, while drawing on the glass in the shower (as I do), it came to me: I need something transparent! A plastic sleeve and a whiteboard marker later, and the function-flipper was born! 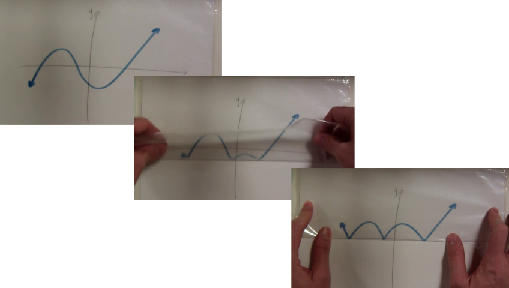 I made a very quick-and-dirty video to show it to you in action.

An unexpected discovery is that whiteboard markers rub off of plastic sleeves, so you can draw and redraw all sorts of functions without needing to get a new sleeve. This means you could probably give a plastic sleeve and a marker and a tissue to everyone in your class and have them investigate for themselves.

This entry was posted in Being a good teacher and tagged physical manipulatives, teaching methods. Bookmark the permalink.