The trig functions are about multiplication

When I was taught trigonometry for the first time, I learned it as ratios of sides of right-angled triangles. Like this:

Most students coming into a Science degree at the University of Adelaide are at least vaguely familiar with this, and it’s their first instinct when using trigonometry. However, the lecturers in Physics and Engineering don’t actually use trigonometry this way. When they are resolving a vector into its components, they actually use a rule something like this:

They don’t explicitly tell the students that this is the rule they are using, they just do it as if it’s the most natural thing in the world. Many of the students are bamboozled by this, and come to the MLC needing a little bit of algebra to figure this out from their existing understanding of trigonometry.

When I first started at the MLC, I was mildly annoyed that the lecturers skipped all this reasoning. After a while, I realised that from their perspective they weren’t skipping reasoning at all – they really did think about it in one step – and it made me wonder if you couldn’t start your trig journey thinking about the trig functions in terms of multiplication rather than division.

I know we often call them “trig ratios”, but in practice we are really more interested not in the ratio itself, but using it to find one side when we know another side. So in that sense the trig functions are not ratios, but multipliers. That is, it’s not so much that sin(θ)=opp/hyp, but that opp = hyp×sin(θ). Of course, these are mathematically equivalent, but I don’t think they are conceptually quite the same thing – division is quite a different idea from multiplication!

Moreover, our formal maths definition of sin and cos matches more closely with this idea. According to a mathematician, sin(t) is defined to be the y-coordinate of the point on the unit circle which is t radians along the circumference anticlockwise from the point (1,0); and cos(t) is the x-coordinate. 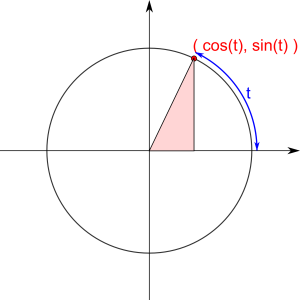 If you focus on the triangle that is part of this diagram, you are essentially defining sin(θ) as the side opposite θ in a right-angled triangle whose hypotenuse is 1. Like this:

In this case, when you’re thinking about a triangle with hypotenuse L, you’re really just multiplying all three lengths in this triangle by L. Or alternatively, multiplying L by cos(θ) and sin(θ) to get the other two sides. 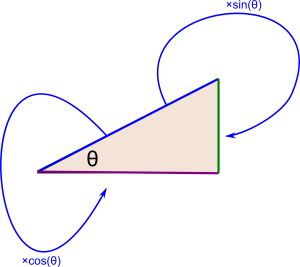 The interesting thing is that none of these three diagrams contain tan(θ). Where does it belong? I usually think of tan(θ) as the slope of the line from the origin to (cos(θ),sin(θ)), but what is slope but how much the line rises for every 1 across? In that case, tan(θ) belongs in a triangle like this:

So now we have this for our multipliers: 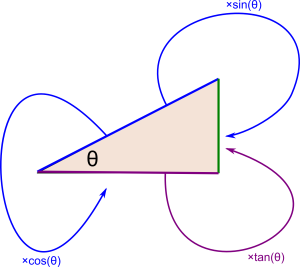 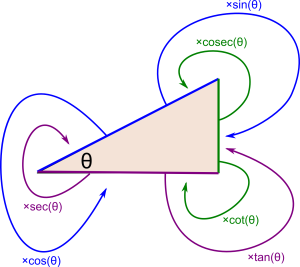 When I first learned the trig functions, I saw them as calculations you did on the sides of a triangle that happened to be constant across triangles of the same shape. For a long time, I didn’t even have the “constant across triangles of the same shape” part and only saw them as a random calculation I could do with sides of a triangle. Either way, I never felt like I really understood them. The calculation was just a calculation and wasn’t directly related to my sense of shape. Plus, whenever I used them to solve problems, it always involved rearranging equations, so they were always one step removed from what I had to do with them.

Now, I have two new ways to see them. I see them as lengths in triangles of a standard size, and that all other triangles are enlargements or reductions of this standard triangle. This is more about the relationship between the triangles themselves and has a dynamic feeling to it that appeals to me. I also see them as multipliers that allow me to use any one side of the triangle to figure out the other sides. This means they are closer to my experience of using them, without having the middleman of algebraic manipulation to distract me from their purpose.

This entry was posted in Isn't maths cool?, Thoughts about maths thinking and tagged explanations, trigonometry. Bookmark the permalink.