There are two terminologies in probability which many students are confused about: “independent” and “disjoint”. The other day I was working with a student listening to their thinking on this and I suddenly realised why.

In your standard introduction to probability notation, various notations and terminologies are introduced, usually with reference to the meaning of the English words and also with reference to Venn diagrams. Here is a streamlined version:

When a student is learning probability, we actually tell them to use the Venn diagram to help them know the meaning of the probability terminology. When they get to “independent”, they simply do what we taught them to do. They look at a Venn diagram and they think of an arrangement of the circles which says “independent” to them. My student the other day said, “Well, independent means not reyling on each other, so in the picture that would have to be two circles that don’t touch.” But of course, the English meaning of the word independent doesn’t describe how a Venn diagram looks when events are statistically independent! In some sense, we’ve set up our students to fail!

But what are we to do about it?

Well, I have a few ideas.

Firstly, do what I just did and line up all the definitions. Then it’s much more clear that independent doesn’t have a direct link to the Venn diagram. It certainly worked for me!

Secondly, make Venn diagrams to illustrate what independent does look like. Basically, A and B have to overlap in a very specific way in order to be independent. I don’t recommend using circles because it’s too hard to see the specific relationship between the areas. (In general I don’t like circles for Venn diagrams actually.) This seemed really to help the student I was working with that day. 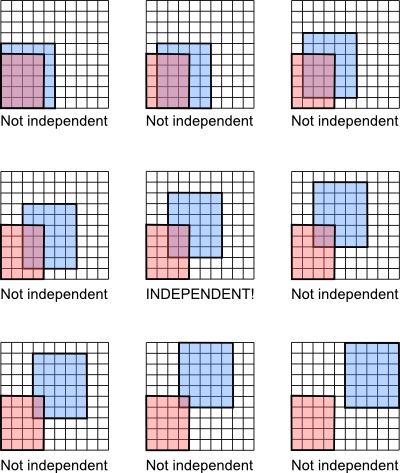 Finally, to find out if your students understand, give them a task to do. I gave this one to a third-year statistics student, and it highlighted that he still had the picture for disjoint in his mind, even though he knew the formal definition of independent. 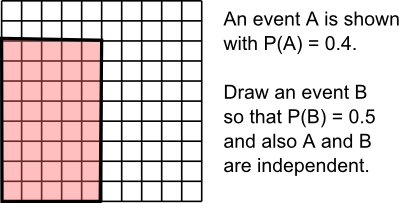 This entry was posted in Being a good teacher, How people learn (or don't), Thoughts about maths thinking and tagged explanations, probability, statistics. Bookmark the permalink.