Upon Amie and Cathy‘s request, I am writing a blog post about a problem we worked on at One Hundred Factorial recently. In fact, in order to do so I am creating a whole new category for the blog called One Hundred Factorial, so I can talk about the things that happen there. (Just so you know, One Hundred Factorial is the name of our regular puzzle-solving gathering of staff and students here at the Uni of Adelaide. I tweet about what we do under the hashtag #100factorial.)

Anyway, a few weeks ago we became interested in problems involving removing spots from dice. A good place to start is the following puzzle, which we created during our investigations: 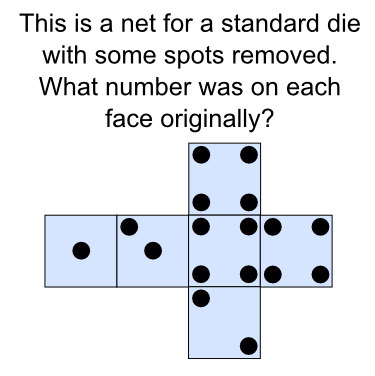 In order to solve this, it might be useful to know the ways that we envisaged the dots on a die are arranged, which are shown below. We don’t really care about the orientation of each face, only the relative arrangement of the dots. Also, it might be very useful to know that on a standard die the faces opposite each other add to 7. (Go look at a real one and you’ll see it’s true.)

If you have a go at the puzzle, you’ll probably find yourself doing a bit of quite sophisticated reasoning using various if-then statements. I can imagine quite an interesting exercise of writing down all these statements and arranging them into a proper proof of what the original die must have looked like. If you’ve got a group of people, see if you can come up with multiple different proofs that follow different lines of reasoning.

But that’s just the starter! The real fun for us happened when I asked how I might change the question. In the problem above, we removed four of the spots and were still able to tell which face was which. Just how many of the spots can we actually remove? 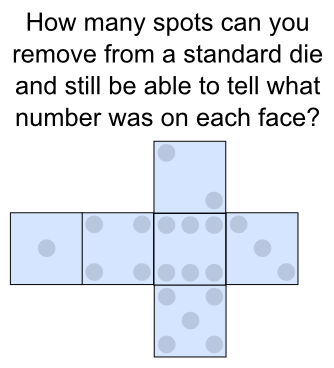 This problem is very interesting indeed, especially because there are multiple ways to interpret the question. If you own the die and are familiar with how the faces were arranged relative to each other before you removed the spots, you might get a different answer than if you were a new user of the die who only knew it was a die with some spots removed. As you work through them, you can create some puzzles of your own like the intro puzzle (that’s how the intro puzzle was created in the first place, but I thought it’s a good way to get started with the concept).

There are several other questions you can ask that we didn’t even begin to delve into yet, but I would love to think about one day:

PS: I should say that the inspiration for this puzzle was from seeing Eric Harshbarger’s wonderful dice collection (which doesn’t seem to exist online any more) though the versions of the puzzle here are all my own (with the help of some of the other puzzlers from One Hundred Factorial).

UPDATE: Discussion on how I used this in a classroom, and some improved starting versions of the puzzle are at a later blog post A Day of Maths 4: Spotless Dice

This entry was posted in One Hundred Factorial and tagged puzzles. Bookmark the permalink.