The teacher, Anne, was an absolute star. She supported the project from the first inkling of an idea; she made sure I was introduced properly and looked after on the day; she wrangled forming groups and slotting the activities into classroom norms; she discretely supported the students who needed extra support to participate; and she provided her characteristic gentleness, firmness and humour. It would definitely not have worked without her support!

Anne started by showing a couple of videos about maths learning, one highlighting a bad experience, and one highlighting places maths comes up in unexpected jobs (thanks to BTN from the ABC). Then we introduced me properly and I talked about what I do at work and how many years of study it took to get there, as well as showing them what my PhD looked like. Anne really wanted to inspire them to the possibility of further study after school, regardless of university or TAFE or apprenticeship.

Then Anne had the students write short reflections on what maths is and how they enjoy it. Several of the students really did not like maths, but did express the importance of learning it. (I’ll get back to this later.)

And then the Maths Day started in earnest. We did Quarter the Cross until recess, Spotless Dice between recess and lunch, and Hotel Infinity after lunch, with some Zero Zeros and Rhombic Dodecahedra thrown in for good measure. How they went and what I learned are worthy of blog posts in themselves, so keep an eye out for those very soon!

As I said earlier, it was the Best Day Ever. I had such a great time learning with the students, and helping them see that they were capable of doing maths and succeeding, and helping them see that actually it can be fun and creative and rewarding. I saw pretty much every student learning right there in front of my eyes. They were having a go, and asking great questions and even answering their own questions.

Several students could be seen running up to Anne throughout the day to show her excitedly the things they had made or found out or solved. A group of students became interested in the Rhombic Dodecahedra at lunchtime and learned to fold the origami units I’m using in the Space-Filling/Mind-Filling artwork. One of them went on later in the week to build his own and post it on DIY.org. One student came out of class at the end of the day saying, “That was really fun.” (For a teenager this is high praise!) My own daughter had several opportunities across the day to be successful and to use her success to inspire others to greater heights.

But the greatest impact the day had on me was seeing the impact it had for one student in particular. At the start of the day, she said she did not like maths at all, even drawing a frustrated and sad face on her reflection. But throughout the day, she was inspired to give things a go that others tried, and persevered with her work. She even took a leading role in one of the group problem-solving activities. Her reflection at the end of the day was this (punctuation mine):

How much do you like math?
I like maths a lot better now.
Before it was like “Get me out of here.”
But now it is “Can we keep going?”

Writing this now I have tears in my eyes. There is nothing greater I could have hoped for than to help make this difference in a young person’s life.

Thank you Anne and all the students for the opportunity. 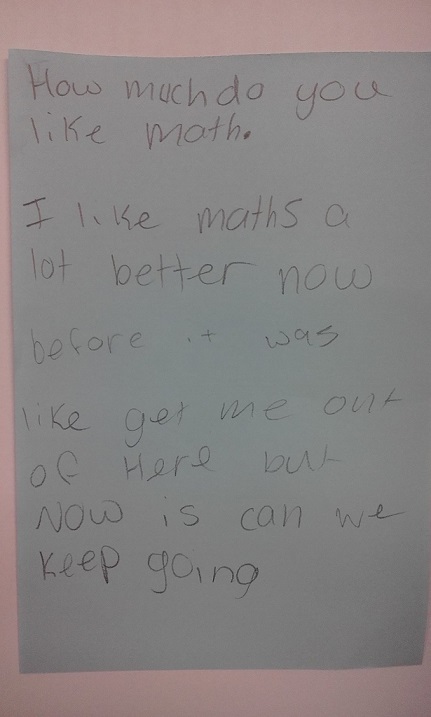 This entry was posted in Being a good teacher, How people learn (or don't) and tagged Maths Day. Bookmark the permalink.