A Day of Maths 5: Looking at Maths Art

This is the fifth in a series of posts coming from my Maths Day in a Year 7 classroom. So far I’ve talked about the following:

You may be thinking by this stage, “David, how much more can you possibly have done in one day?” Well you might ask. Looking back, I did seem to pack a lot in there. Of course, on the day itself, time just seemed to vanish so quickly and I just didn’t realise how much we actually did until I came to write about it!

Anyway, this post is about what we did after lunch. We’d gotten the students to stick everything they’d done so far into their maths books before lunch, and tidy up their desks. Anne took a moment to deal with everyday school things, like this week’s homework, and who was doing what later in the week. In a way, everything felt like it was “swept clean”, ready for the afternoon session.

We got them all to come down onto the floor again, and I fired up the screen to show them some pictures. At the start of the day I had told the students what I do on a day-to-day basis, but I had omitted one important aspect of what I do: mathematical art. For the last decade, I’ve been building mathematical artworks, mainly in the collaborative construction vein. I thought it was time to show some pictures of what I (and my myriad of helpers) had done. You can see a gallery of the pictures I showed on the newly-redesigned Maths Art and Play page on the MLC website.

I showed the photos one at a time, told the students what they were called, and asked the students if they noticed anything and if they had any thoughts or questions. And my goodness they did. With the Sierpinski Sponge, the students noticed how big it was by comparing to the size of the people in the photos. They asked how many little pyramids there were in each one, and how many there would be in the next stage up. They wondered how long it took to make all those little pyramids. With the RiAUS Hyperbolic Crochet Coral Reef (which I didn’t lead, but I did make some pieces for it, and I got to meet a Duke because of it), the students wondered which bits in the picture were the ones I made. They wondered if it was all wool, or if some of it was other materials. They wondered how many different people were involved in making it. They wondered why the word hyperbolic was there. The wondered how you made these things yourself. With the string quadrics, they noticed that it was possible to reach into the second one. They noticed that there were a lot of strings going both ways. They noticed how these were similar to the drawings they’d sometimes done using straight lines on paper. When I said mine were a bit different because the lines in mine were actually part of the curved surface, they wondered about what the relationship actually was between the lines they draw on paper and the curve they appear to see there. With Random Journeys, they noticed there was a maze-like pattern to the artwork. When I said there was a simple rule where we added the tickets one at a time, they wondered where the first one was. When I said that new tickets were added so that their short edge was touching a long edge of an existing ticket, they noticed that some of the tickets were not added according to the rule. 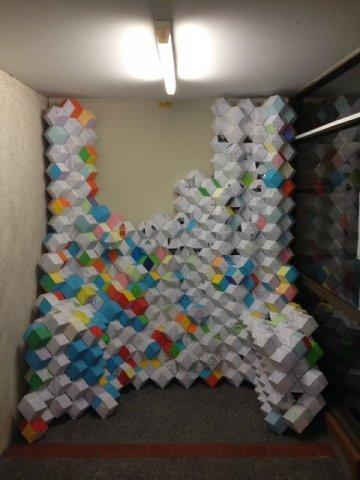 Finally, with Space-Filling/Mind-Filling, they noticed that the shapes here were the same as the ones I had brought to the class that morning. They noticed they were different from the regular pentagon dodecahedra they had already made earlier that hear and which were hanging from their classroom ceiling. They wondered how big the space was that I was planning to fill. They wondered how many dodecahedra it would take to fill it.

I love showing my artwork to people, because I get to see them anew through their eyes. I get to watch the wonder in their eyes and start a conversation about things that people wouldn’t normally think about. With these students, it was particularly rewarding. Children have a keener sense of wonder than adults (sadly for adults), and it was refreshing to bask in it as they wondered and noticed things, some of which I had never wondered or noticed myself before.

This entry was posted in Isn't maths cool?, Other MLC stuff, Thoughts about maths thinking and tagged art, Maths Day. Bookmark the permalink.