The line at infinity: conics

The story so far

I promised Tina on Twitter that I would write about how the line at infinity relates to conics, and I’ve been doing it in the last two blog posts.

First, I talked about what the line at infinity is. We noticed that a set of parallel lines all share a slope, so we elevated all the slopes to the status of points and gave them a more physical reality as “points at infinity”. Now lines we thought were “parallel” aren’t anymore because they actually meet. Any two lines meet, though possibly at a point at infinity.

Second, I talked about a system of coordinates that includes the line at infinity. It turned out we could do this by giving both points and lines three coordinates, with the understanding that any nonzero multiple of a set of coordinates represents the same point/line.

If we want to, we can think of this like magically travelling to stand on the line at infinity, and from that perspective it looks just like any other line. Interesting things happen when you shift perspective this way. For example, consider two parallel lines and a transversal: if you stand on the line at infinity, you can see the point at infinity involved, and the three lines become just an ordinary triangle. We’re going to talk about what happens when you do this to conics. 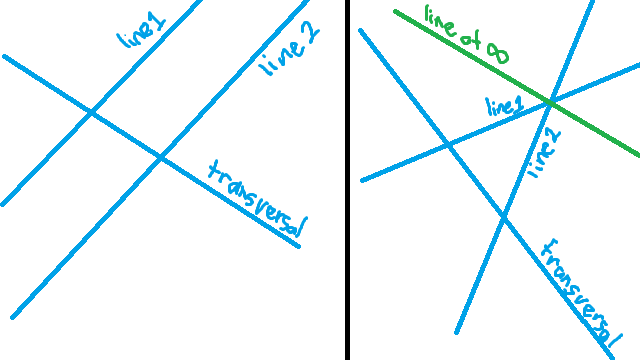 Conics began life millenia ago as literal sections of a cone. You took a circular cone, including both a top nappe and a bottom nappe, and you sliced it with a plane at various angles to produce various results – parabolas, ellipses, hyperbolas. If you arranged it just right, you got a point, or a single line or a pair of lines. These are often called the “degenerate conic sections”. 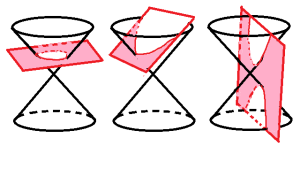 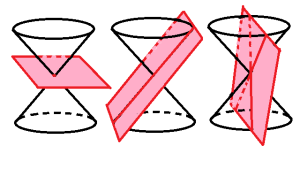 There are a few extra possibilities that appear from our equations that aren’t covered by our cone: a pair of parallel lines, and an empty set where no points at all satisfy the equation. To include these, we’ll drop the word “section” from the name, so that they’re still objects related to cones in some roundabout way, but not necessarily a section of a cone. 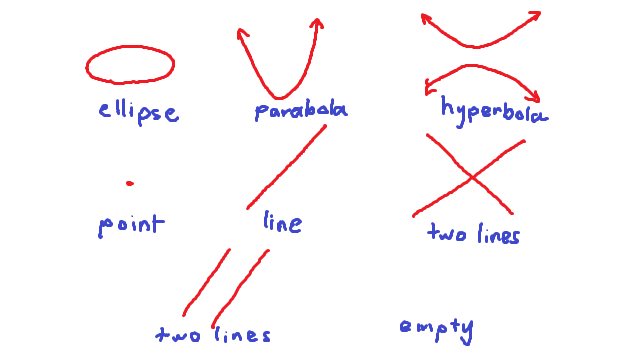 (Someone is sure to notice the slight dodginess here too: I’ve still used x and y to mean different things before and after the change. My geometry lecturer back in the distant past switched to capital letters to mark the change, but I think we’ll cope with just a little bit of notational sloppiness for the ease of explanation. I hope so anyway.)

So the linear terms get a w attached to them, and the constant term gets a w2. This has the effect of meaning that in every term there are two variables multiplied together, either two different ones like xy or yw, or two of the same like x2 or w2. All the terms are the same in some sense now — homogeneous, as it were.

We’re now ready to figure out how our conics meet the line at infinity. Well, nearly. First it’s probably a good idea to know how conics meet ordinary lines! Drawing some pictures, I can convince myself that a line either misses a conic entirely, meets it in exactly one point, meets it in exactly two points, or (in the case of some degenerate conics) is actually part of the conic itself. 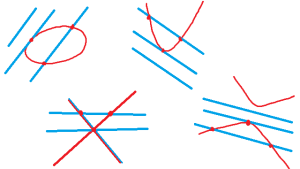 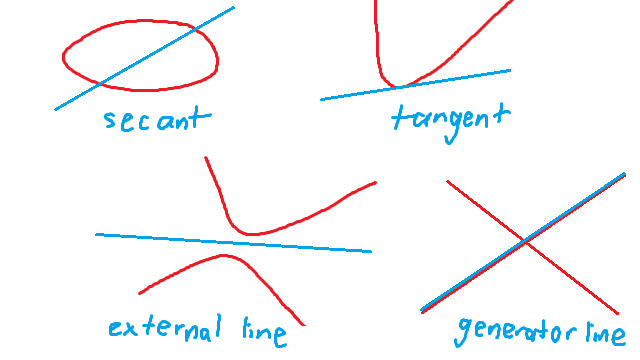 A story about me: My PhD thesis was mostly concerned with tangents, secants, generators and external lines of conics and their higher-dimensional friends and relatives, so these words bring back all sorts of memories for me. In particular, I remember giving my second-year thesis seminar the title “David Butler and the Chamber of Secants”. (The first-year seminar was called “David Butler and the Philosopher’s Cone”, by the way.)

How conics meet the line at infinity

This is all well and good, but it’s not particularly edifying is it? No, not really. Perhaps it might be best to do this trick with our standard versions of the three non-degenerate conics. That might be a bit more illustrative. I’ll do them in this order: hyperbola, parabola, ellipse.

It’s interesting to note that the asymptote meets the conic in exactly one point (x, (b/a)x,0) = (1, b/a,0). That makes it a tangent. Also, even though the two branches of the hyperbola both approach the asymptote, there is only one point where they meet. That does make sense — way back in the first post, we figured out that the point at infinity on any line is both behind and in front of us. If we imagine standing on the line at infinity, you’ll be able to see this point where the conic meets the asymptote. One branch of the hyperbola meets this point on one side, and the other branch meets it on the other side. So here at infinity, the hyperbola links up to itself, like an ellipse. 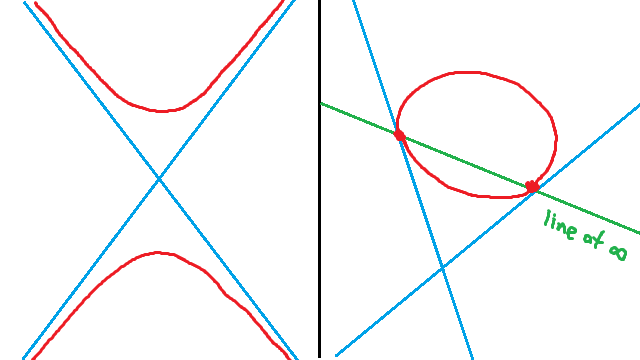 Your standard form of a parabola equation looks like this: y=ax2. In homogeneous coordinates, this is yw = ax2. When we sub in w=0 we get 0=ax2, so x=0. This gives us one point (0,y,0)=(0,1,0). So the line at infinity meets our parabola in one point — it’s a tangent. Interestingly, this is the point at infinity on the y-axis, which is the axis of symmetry of the parabola.

Admittedly, this is only two examples, but I’ll trust for a moment that it works. If I do trust it, it seems if I stand on the line at infinity, it’s tangent to the parabola, and the parabola links up to itself at that spot, like an ellipse. 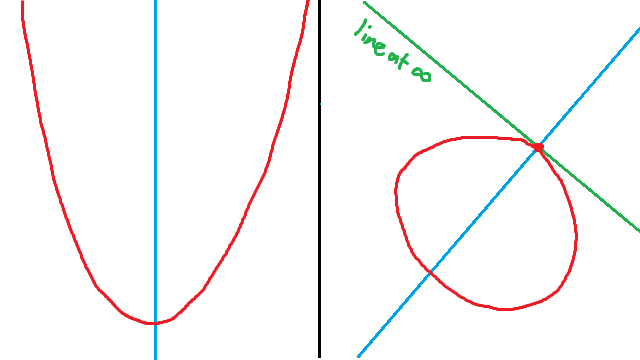 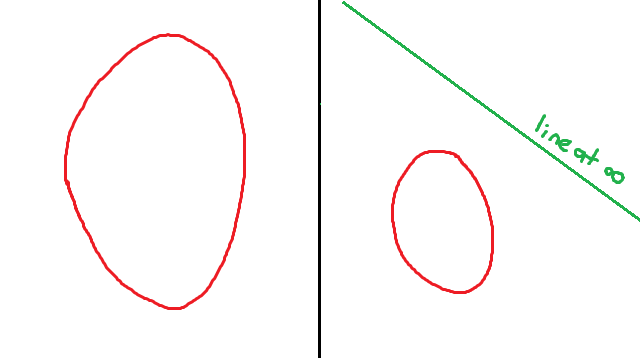 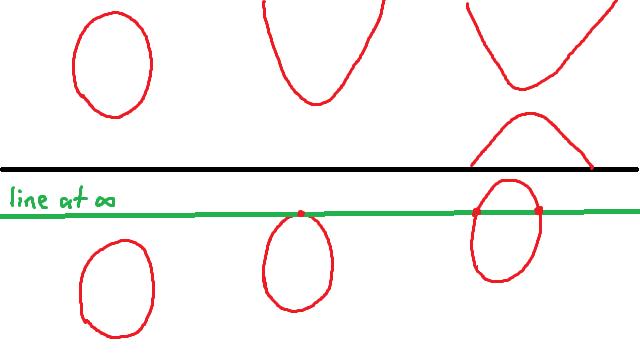 And I think that might be enough. Except for one parting shot — if we have a random quadratic equation, we have a good chance of knowing what kind of conic it is by seeing how it meets the line at infinity. Our original conic with equation x2 – 3xy + y2 – x + 4y – 7 = 0 met the line at infinity in two points, so I can be pretty sure it’s a hyperbola. It is possible it’s actually a pair of lines, I suppose — a pair of lines also meets the line at infinity in two points. There is actually a way of telling the difference, which involves making a matrix and calculating its determinant. But that’s another story and shall be told at another time.

This entry was posted in Isn't maths cool? and tagged geometry, maths. Bookmark the permalink.