Last week, I helped quite a few students from International Financial Institutions and Markets with their annuity calculations, which involve quite detailed stuff like this:

There were several small issues a lot of them had, which combined to stall their calculations. One of the more important problems was about how the calculator interprets what they type into it, which is really in essence about the order of operations.

When I look at the formula above, I see many pieces that are put together in various ways to make a number called “PV”. These pieces are combined using various operations, and are also held together in order to go into these operations with various grouping symbols. Some of these things have a stronger “hold” than others and will enforce certain things to be done before other things are done if I were to actually do this calculation. This is the “order of operations”. I’ve written about it before, but I’ve moved on in my thinking quite a bit since then!

While many people use some sort of acronym to remember the order of operations, that has never worked for me. Instead I have a picture of a hierarchy of operations like this: 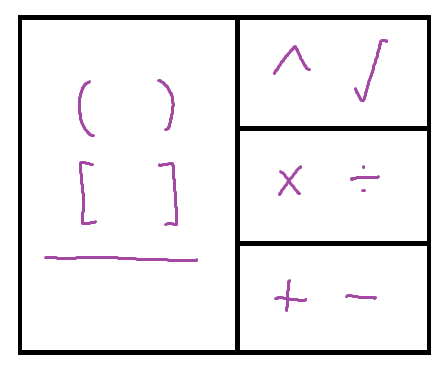 When I draw this on paper, I start at the bottom, drawing the + and – first. Then I draw the × and ÷ above that. Then I draw the ^ and √ above that. Finally I draw the box on the side with the (), [], ___. The idea is that + and – are the most basic and hence least important to do before things nearby followed by × and ÷ and then by  ^ and √ . The symbols on the side are for holding things together in order to override this hierarchy. It’s worth noting that I use this picture to remind myself which things expand out over which things when there’s brackets in the way. (If I was particularly clear-minded, I might draw the × and + even further to the left than the others because they work fine in both directions whereas everything else is different in different directions.)

Anyway, this order of operations allows me to analyse the expression above and tells me that the r/n on the bottom there is held together before it becomes part of the larger division. It tells me that the r/n inside the brackets is more important to calculate before the “1+”. I also know, though it’s not written in my order of operatons picture, that the little -nt is all inside the top of that power, and needs to be done before I can resolve the power itself.

Unfortunately, the scientific calculator (or Excel, or Wolfram Alpha) is less clever than this. When I type things into the calculator, it can’t see the physical arrangement of things on the page. It can’t tell that some things are smaller than others and arranged at the top. It can’t see that there’s a big horizontal line holding the r/n together. The only way the calculator knows to hold things together is with some brackets. So I’m going to have to turn all the things that visually hold things together into brackets.

So suppose I wanted to calculate the following:

If I only typed the symbols I see like this:

This entry was posted in Thoughts about maths thinking and tagged order of operations. Bookmark the permalink.