An opening gambit for the Numbers game

It was O’Week a couple of weeks ago, when new students arrive on campus to find out how uni works and the services they have access to. Our tradition for the last several years is to play Numbers and Letters on a big whiteboard out in public as a way to engage with students.

In case you don’t know how the Numbers game works, here’s an example. 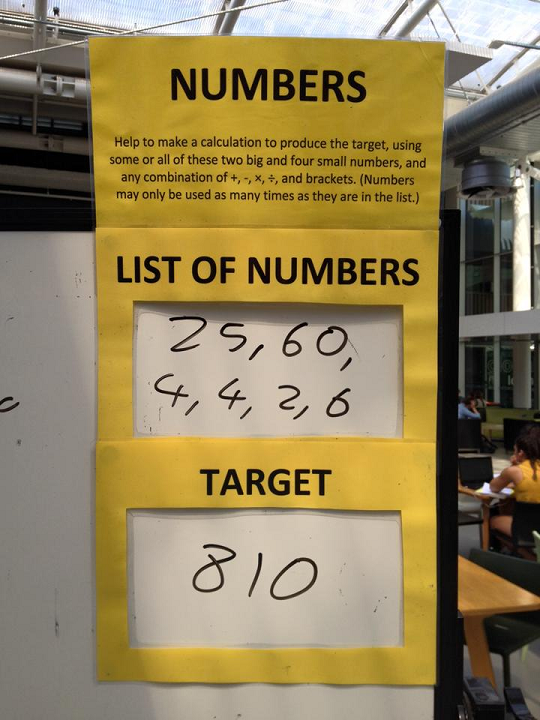 The small numbers, big numbers and the target are chosen randomly. We do it by choosing pop sticks from some buckets.

Whenever we do this I am fascinated by how people approach the games. Many of them stand there staring at it apparently trying to come up with the solution by sheer mental effort. These especially seem to be people who have just revealed they are studying a degree with a lot of maths in it. Others refuse to participate at all, claiming that they are not a “maths person”.

This year I discovered a way to help both types of people engage: write something on the board that is not a solution. After a minute or so, I’d take some of the numbers and do an operation on them so that the answer was within a couple of hundred of the target (but not equal to the target) and write this calculation on the board.

I had been announcing this move by saying, “Here’s my opening gambit”. Upon hearing this, one of my staff said it wasn’t a gambit because that’s a chess term for when you make a sacrifice to hopefully be made up later. But it occurred to me that I DID make a sacrifice: I sacrificed looking clever in order to help everyone participate. And it was a very worthwhile sacrifice, because this year’s Numbers game was a much more positive experience for our new students, and for me.

This entry was posted in How people learn (or don't), One Hundred Factorial and tagged puzzles. Bookmark the permalink.