I have a whole suite of maths t-shirts that I made myself. One of them simply has the number 65536 on it. It’s been getting a bit of attention over the past couple of weeks, so I thought I might write about it. 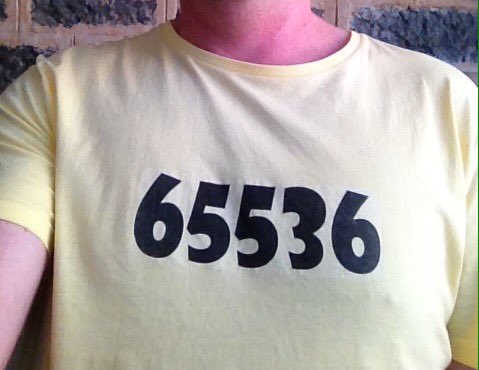 65536 is my favourite power of 2. More specifically, it’s 216, which means you can make it by starting at 1 and multiplying by 2 sixteen times. Even better…

Fermat apparently conjectured in 1650 that they were all prime, which is why numbers of the form 2^(2^n)+1 are called “Fermat numbers” and if they’re prime they’re called “Fermat primes”. But so far, no more Fermat primes have been found. That is, every bigger number of the form 2^(2^n)+1 that we can calculate has been found to not be prime after all. Yet we haven’t been able to prove that there are definitely no more of them.

Isn’t that amazing? In close to 400 years we haven’t been able to find any more Fermat primes, but neither have we been convinced beyond a doubt that there aren’t any. I think it’s awesome that in maths there are things so simple that at the moment are unknown.

This is from a paper in 2000 from Jeffrey Shallit: “Minimal primes,” J. Recreational Math., 30:2 (1999–2000) 113–117. He talks about it here. Within a set of numbers, he calls the “minimial set” those ones with none of the others in the set in order among their digits. He references another author’s theorem which says that given any set of numbers, the minimal set within it must be finite.

Isn’t it amazing that the prime numbers with all their apparent randomness have allowed us to find their minimal set, but the powers of two with their obvious regularity haven’t?

So that’s why 65536 is my favourite power of 2. It represents to me some cool ideas, and more than that, it reminds me that maths is far from all done in the distant past, it’s got unanswered questions alive right now.