Home in One Piece: a game of strategy using play dough

This post is about a game I invented called Home in One Piece. I invented it in 2014 specifically to play outside at student barbecues, after years of trying to think of an effective game using play dough. I’ve taken the physical version with me to various places to play it, including to Twitter Math Camp in the USA. It’s time to let it out into the world and allow people to play it for themselves.

Home in One Piece is a game for two players that is played with play-dough. Each player has eight blobs of play-dough and the goal is to join the play-dough together and move it across the board, so that finally you win by having all your play-dough together in one blob in the home zone (hence the name Home in One Piece). The original version was a pure strategy game, but then I remembered that I prefer games with a chance element, so I created three special dice to control how many of your blobs you are allowed to manipulate during your turn. 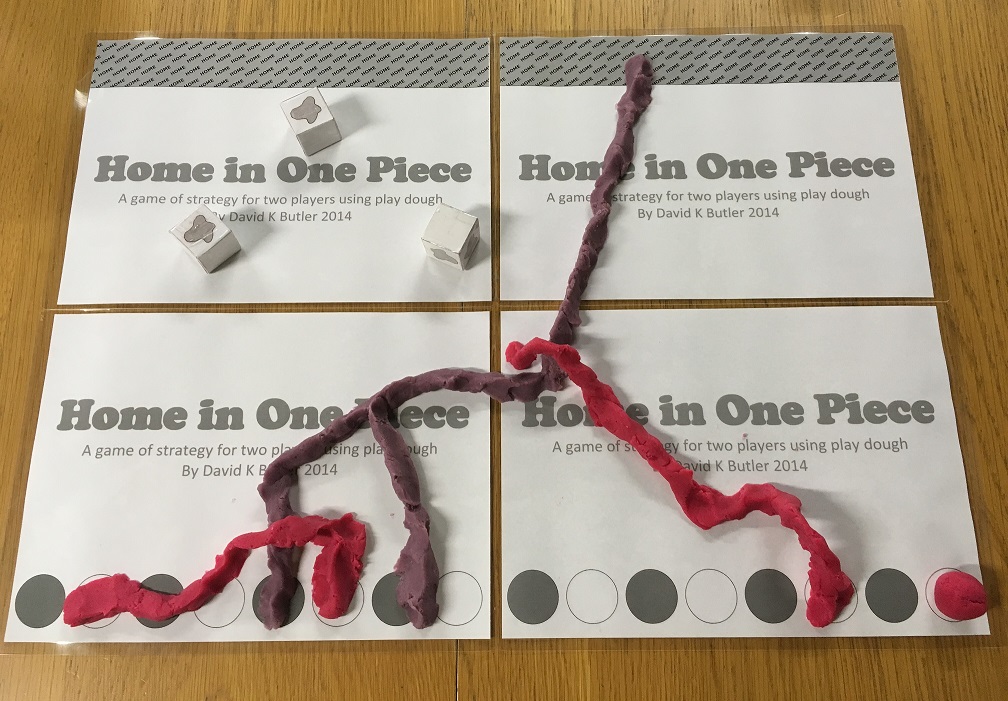 To make the game you need the following components:

Here is a YouTube video of a game in action, so you can have a better idea about how these rules work in action.

There are so many things I love about this game, if I do say so myself. I love the physical and three-dimensional nature of it, with the manipulation of the play-dough in space. I love the contradictory feeling of freedom and constraint of being able to make the play-dough whatever shape I want, yet having to hold it down in one spot. I love the fact that the movement condition is continuous, whereas in almost all other games it is discrete. I love sitting on the same side of the board as my opponent, so that we are both looking at the same game and reaching past each other to play. I love the fact that I’ve arranged the dice so it’s possible to roll 0. (If you’ve played my other games you might notice that particular fascination of mine.)

Mathematically I love thinking about what it means to be “one blob” and about the interesting topological shapes that happen when people join and rejoin blobs. I am particularly in love with my dice, which have been arranged carefully to give the right probabilities for the different numbers with only one dot per face. (That was a whole wonderful investigation, I can tell you!) I love secret problem zero of dividing your blob into eight equal pieces.

But most of all I love watching people play it. I love the shapes they make, and the realisations they have about what is possible and not possible — I love the walls and lakes and bridges people build, especially bridges over bridges over bridges. I love the cries of despair when the play-dough breaks and when someone rolls zero. I love how lax people are about their play-dough touching at the beginning and how unforgiving they are about it at the end. I love watching people wander over, fascinated at what the hell is going on with the play-dough here.

I hope you enjoy the game as much as I do. Please let me know how it goes!

To finish off, some tweets of the game in action (note this is the first version of the game, which had the rules printed on the game-board.)

Home in One Piece drawing a crowd at #tmc17 pic.twitter.com/CQs2Em0nl7

Another game in progress #100factorial pic.twitter.com/w1ADRPUHob

This entry was posted in One Hundred Factorial and tagged games, play. Bookmark the permalink.