The Human Galton Board

Last week we were booked in to do Human Markov Chains with several groups of school students, but it turned out there would be a lot fewer of them than we expected, and I didn’t think Human Markov Chains would work very well with under 20 students. I still dearly wanted to do a moving maths activity, and I still wanted it to be about probability, but I wasn’t sure what to do.

Then, on the morning of the day the students were coming, I had an inspiration and quickly knocked together the Human Galton Board.

The Galton Board is a device that is used to illustrate the binomial distribution, usually with little balls falling through grid of pegs where the balls bounce back and forth from one peg to another, to come to rest in little bins at the bottom. (It also goes by the name “quincunx”, but I was not going to use that word with high school students!) My idea was that you could achieve this with human bodies walking paths, but there was still a problem of not having enough people to create the graph using “bins”. Then I realised that the people could tread the path multiple times and create a graph of where they had arrived by stacking up some sort of block. All I needed was a way for them to get instructions for which way to go, which I knocked together on the train journey to work. Nothing like a last-minute plan!

I started by drawing a giant Galton board on the ground in chalk, making sure it had 11 circles at its widest end. I carefully drew connecting lines in yellow for left and blue for right (it was easiest to do this diagonally in one colour and then in the other colour). Then I drew big numbers 0 to 10 above the last row. Like this: 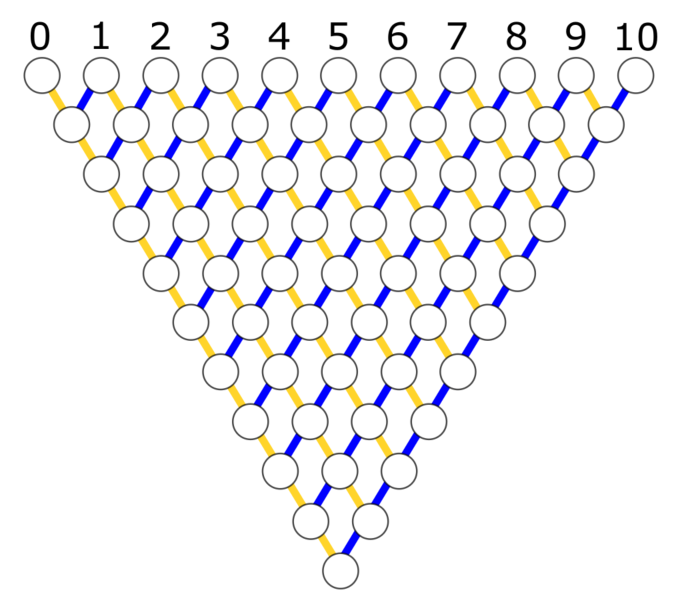 I also set up a table beyond that last row, with labels 0 to 10, in order to build our graph. I needed something to use as blocks to make our graph, so I brought down a box of videotapes and placed it at the pointy end of the Galton board.

Finally, I randomly generated sheets with 100 arrows in rows of 10, which had questions to consider printed on the back. These were what the students would be using to trace their paths through the Galton Board. You can download a Word document with the arrows/questions.

I gave out a sheet of directions to each student, and then demonstrated how to use the directions to walk the Board. The process is this:

I discovered quickly I needed to be explicit about only following the lines and that the left and right arrows did not mean moving exactly left and right but always moving forward. Also I needed to be explicit that you had to stand on the first circle before taking your directions. The colour-coding of the directions turned out to be a really good move, which helped them to follow the directions more easily.

I asked the students to do this three times each (or four for the smaller groups), and at the end when they were milling around wondering what to do, I asked them to turn the page over and think about the questions there while they waited. (The list of questions is further down, if you’re interested, and it’s also in the same file as the random directions.)

Once everyone had gone through the Board the appropriate number of times, I got everyone to come to the table and have a look at the graph we had made. Here is a picture of one from the day. 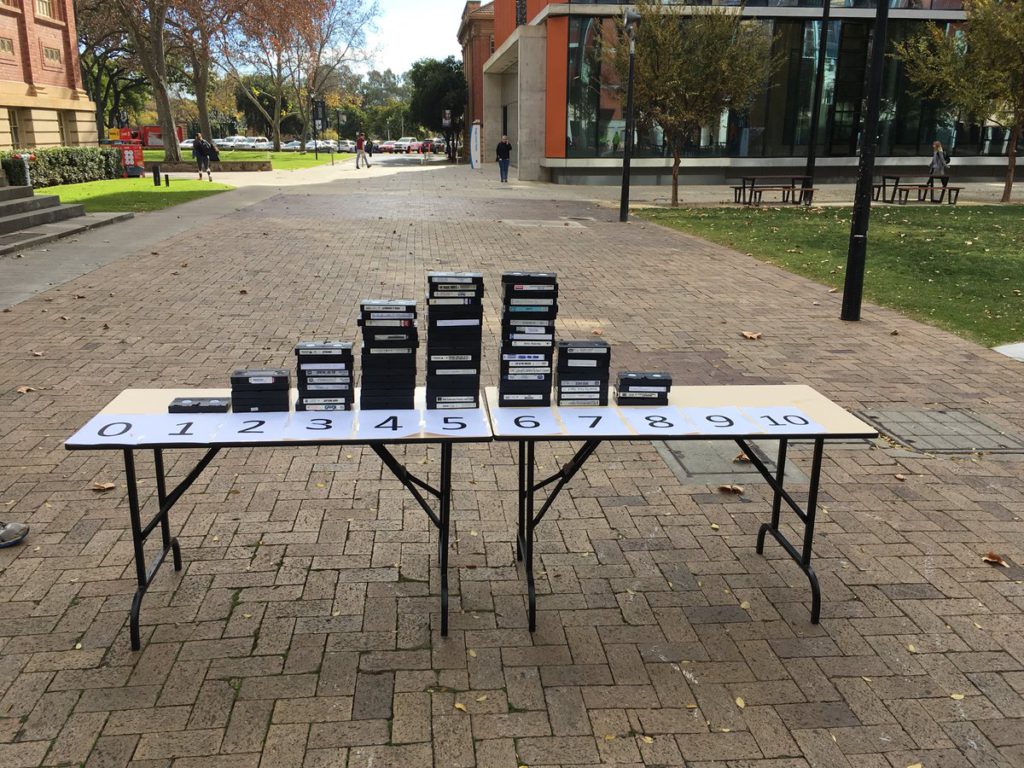 I asked the students to tell me what they noticed. Most students waved their hands to indicate that it was going up then back down again. A couple of students used words to point out how the numbers in the middle had come up more often.

I asked them why they expected the 5 to happen the most often, and there were a few responses. Some were about how there seem to often be as many left arrows as right arrows, some were about how if it’s a 50-50 chance of getting each, then you’d expect as many rights as lefts and that would put you in the middle.

At this stage I asked them to focus on question number 1 from their list, which was “Can you predict where you will end up based on the list of arrows?”. After several students said you could just walk it out, I refined the question to “Can you predict where you will end up just by looking at the list, without walking it yourself?” Some groups really got into investigating this question, using the existing board to walk and check their answers. Other groups had one person who had figured it out and just told everyone else. I encouraged those other groups to check that the answer was really correct by walking out some to see if it really worked.

Spoiler alert: the answer is that the number you end up at at the end of the Galton Board is the number of blue arrows in the list, regardless of the order they are in.

For most of the groups, I asked them to use their newfound knowledge to take some rows from their sheet and put a block in the right place on the graph without walking the board. This made our graph a lot more bell-shaped than before!

After this discussion we went back to our graph and decided another way to explain why 5 was the most common was because there were a lot more paths that get to 5.

And finally I talked to them about the binomial distribution and how it describes how likely it is for something to happen different numbers of times out of a collection, and how Galton had made his Board with marbles in order to demonstrate this distribution, but how much more fun it is to do it with people! I also made the point that a lot of probability situations hide some of the details of what is going on. Our graph only shows the probabilities of getting to specific end points, but completely hides all the individual paths that result in those places. Yet it was thinking about all those individual paths that allowed us to justify the probabilities we got.

I thought this activity went very well considering I only had a couple of hours’ preparation! I was particularly proud of colour-coding the paths and arrows, and of making the graph out of videotape so we could get a good graph by getting students to repeat the process. One thing I liked about it was the physical feeling of going via different paths but still ending up in the same position. If we had had a hundred students each doing it once, I don’t think it would have had the same result.

Next time I might ask the students to chase down the number of paths to get to 2 all the way and to present their arguments. That seemed like a great place to take the investigation. Also I could have focused on the symmetry and considered the number of ways to get to 10, 9 and 8 as well.

A different place to go might be to change the probability of getting a blue arrow and observe what the final graph is like then, even putting the two graphs on the same table to compare. Of course I would need a second set of arrow sheets to do that!

Finally, it ought to be possible to get students to create their own lists of arrows. I could imagine getting the students to roll dice and record left for odd, right for even before you go outside so that the results feel even more random. Then it would be much easier to go back and apply it to a more mundane example. Also you could easily change the distribution and go multiple of three for left, everything else for right.

If I ever do try any of these other ideas, I’ll let you know! If you have any ideas, please put them in the comments so others can be inspired by them!