This blog post is about a game I invented this week, and the game is AWESOME, if I do say myself. 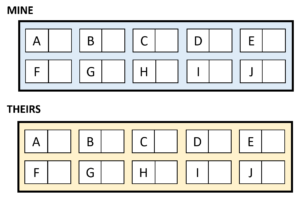 Thoughts from Digit Disguises games I have played

This game was inspired by a puzzle I wrote called “The Number Dress-Up Party“. In that puzzle, all of the numbers are at a dress-up party and you have to find the identity of just a few of them by asking them to perform operations. I was reminded somehow of the puzzle and I was wondering about modifications of it. One thing I was wondering was if I had only a few numbers at the party, how long it would take to find out what all of them were, and so this game was born. Later that same day I played it across Twitter with a friend, on either side of a whiteboard at One Hundred Factorial, and with my daughter at home. I was then completely obsessed.

I learned a lot from these three early games.

In the first game with Benjamin, I was struck by how quickly the logic got complicated, and then how quickly it all cascaded into finding everything when I finally got a few different numbers. It was interesting thinking about what it meant to get the response “not a letter”. I loved finding ways to keep track of the information I knew so far, and making sure I was using all the information I had so far. The presence of the 0 really made for an interesting ride on Benjamin’s side.

When I played at One Hundred Factorial, we played in teams on either side of a whiteboard and it was way more awesome! Firstly, it was heaps more fun to play in teams — talking through the logic so far and finding ways to represent it so the rest of the team understood was a really pleasurable experience. I loved hearing other people’s thoughts about what we knew so far and what we should do next. Not to mention having people notice when we had made a mistake in our logic. Secondly, having a huge space to write all of our reasoning was really nice. It was fascinating to see the other team’s approach, which was to have a big grid of which letter could be which number and slowly cross off the possibilities. I had never even considered doing something like that!

When I played with my daughter C (she’s just turned 11 years old), it was a whole different experience. C had no trouble answering my questions using the letter/number correspondence. In fact, she really enjoyed that part. (Indeed, when I offered to play with C the next day, she was happy just to be the keeper of which letter was what number and let me play Mastermind style.)

I found it rather fascinating that even though they haven’t really done algebra at school, it was perfectly natural for her to refer to these numbers by their letter disguises and to write stuff down on the page in terms of the letters. That is, she didn’t need to be taught about using letters for numbers to really get into the idea of the game. I think that is pretty awesome, actually!

What C was having trouble with was making sense of the information she was getting. She immediately realised that getting something like A-B = “not a letter” meant that A was smaller than B, but she didn’t really know what to do with the information that B-A=C. A little discussion helped her realise that this meant B had to be A+C and both A and C had to be smaller than B. But then it seemed like a huge task to find any letters!

It took a few tries to come up with a representation that was helpful, and a bar model really worked to make sense of it, and even allowed us to pull out information such as I=2F. It was still a little difficult for her to understand how knowing I=2F and I/F=C meant she could know that C=2.

I was thinking that maybe all ten digits was too much for someone her age, but then after finding the numbers 2 and 1, the cascade of finding all the other numbers really gave her a feeling of both power over it, so maybe ten digits was fine..

So I reckon that for kids her age, definitely playing in teams is a good idea, or having the whole class be a team against a mastermind, or even the very first time with the teacher against the class as the mastermind with the teacher describing their thought process, to get an idea of the strategies involved. I’m also imagining a version much more like the original dress-up party puzzle where a collection of students are the numbers and they know which student is which number and the rest of the class have to figure out which student is which number by asking them to combine with operations.

On the topic of “mastermind”, my friend Alex has created a little python script that will allow you to play the game against it, mastermind-style. If you prefer to play in teams but you only have a few players, then you can play with all of you on one team against the computer!

The other thing that is so very awesome about Digit Disguises is how many mathematical wonderings flow out of it so very easily. On top of the usual things that come up during the game, such as what getting an answer of “not a letter” tells you about the numbers involved, you can go a long way wondering about the game as a whole and what happens if you change it.

I have wondered all of these things, but only investigated some of them. I won’t ruin the answers for you for the ones I have thought about already.

I hope you like my game of Digit Disguises. I think it’s AWESOME! If you do play it yourself or with your students in a classroom, or you have thoughts about the answers to my wondering questions, or have anything you are wondering about yourself, please do let me know.

This entry was posted in Isn't maths cool?, One Hundred Factorial, Thoughts about maths thinking and tagged games. Bookmark the permalink.