I don’t like BODMAS/BEDMAS/PEMDAS/GEMS/GEMA and all of the variations on this theme. I much prefer to use something else, which I have this week decided to call “The Operation Tower”. 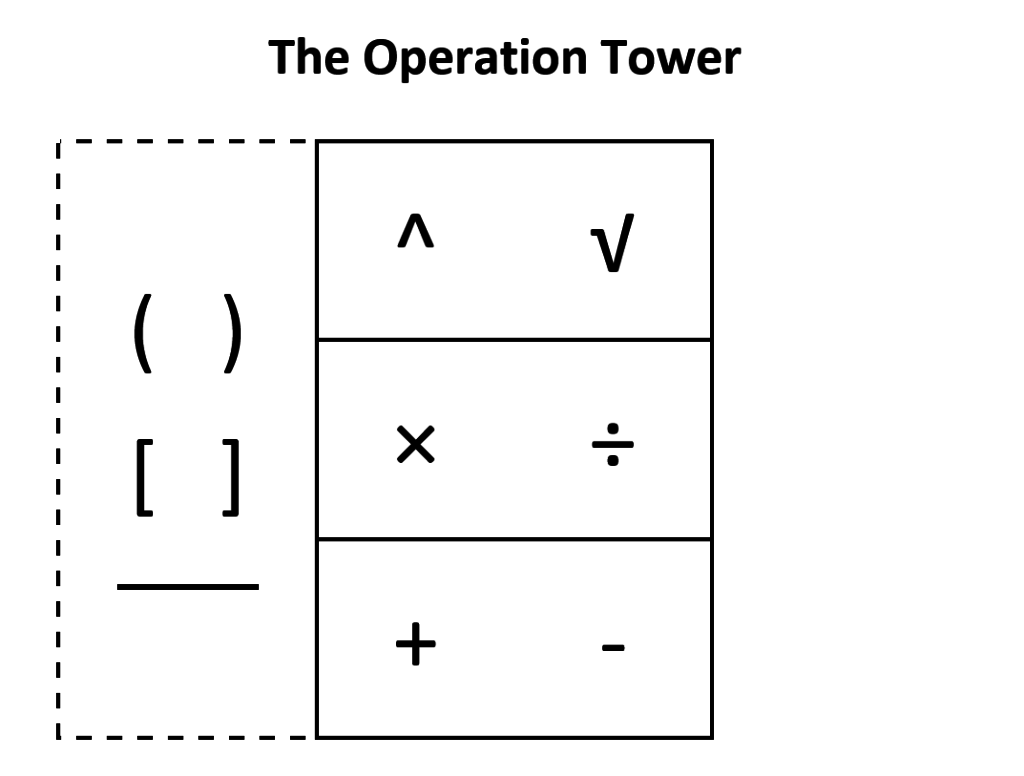 In case you haven’t heard of BODMAS/BEDMAS/PEMDAS/GEMS/GEMA, then you should know they are various acronyms designed to help students remember the order of operations that mathematics users around the world agree upon so that we can write our mathematical expressions simply and unambiguously. For example, the most common here in Australia is BEDMAS, which stands for “Brackets, Exponents, Division, Multiplication, Addition, Subtraction”. The idea being that things in brackets are calculated first, followed by the rest. There are some technical details there, where Division and Multiplication are not strictly in that order, and instead ought to be done in whatever order they come, with a similar rule for Addition and Subtraction. This is one of the reasons I don’t like these acronyms, because if people only remember the list, then they tend to think that addition is always before subtraction. Indeed, I observed someone doing this within the last month.

The acronym GEMA is supposed to get around this by not explicitly mentioning the Division or Subtraction, and by using Grouping symbols to cover all grouping-type things. (If any Australians are wondering what the P in PEMDAS stands for, it’s “parenthesis”. People in the USA actually do use this fancy-sounding word and in their language they think that “brackets” means only the square ones.)

For your ordinary brackets this idea of focusing your attention on the thing inside is their whole purpose. In general brackets aren’t operations but just a way of holding things together so you do the actual operations at the proper time. It really bothers me to have them in a list of operations at all. I do understand they need to be mentioned somewhere, but still it bothers me.

The second thing that makes me uncomfortable is naming the concept by the acronym you use to remember it. I can’t count the number of people who I have heard say “should I use BEDMAS?” when they ask how to evaluate or read an expression. The concept is called “the Order of Operations” or “Operation Precedence” people! Get it right!

Anyway, this makes me less uncomfortable than it used to. It feels more like a mild transient little itch than a raging angry rash. I mostly made my peace with it by imagining they are saying “should I use BEDMAS to remember the right order?” which is perfectly fine. While there is reasoning behind why we do it in the order we do, it is more-or-less an aesthetic choice that could have been made a different way in an alternate reality, and aesthetic or arbitrary choices often need supports to help remember them. Also I realised that people need names for things, including mnemonic tools, and one of the nice things about acronyms is that they are already a name. It’s natural for the acronym, which has a ready-made name, to end up being the name for the thing itself. It doesn’t mean the itch isn’t there though!

So how do I reconcile all of this when I teach people about the order of operations? I use the Operation Tower.

It’s a visual representation of the order of operations, that keeps the same-level things at the same level, and carefully separates the brackets and other grouping symbols out from the operations themselves to make the point that they are different things. The innovation in the last couple of days is giving this thing a name, so that students can talk about it both to themselves and to others (thank you to a friend online for pushing me to do so!)

(Note I have been careful to say “nearby” in that previous paragraph. It’s not actually true that all the multiplications have to be done before all of the additions. Only the ones that are near to additions. Indeed, the whole point of the brackets is to put new boundaries on what “nearby” means!)

I also use the operation tower to help students remember some other rather nice properties of operations. Notice how the operations in each box distribute across the operations in the box below. For example √(4*9) = √4*√9 and (2+10)*4 = 2*4 + 10*4 (though you have to be a bit careful with division). Also notice how the higher things inside a log turn into the lower things outside the log. That makes the Operation Tower a reusable tool for multiple different things, which I rather like.

But the thing I like the most is how students respond to it. It really seems to make sense to them to organise the operations spatially as they learn for the first time that there is an order mathematicians prefer to work in, and they seem to understand that the brackets are a different sort of thing and appreciate having them listed separately. For those who are like me and have serious trouble remembering the correct order of letters, it’s much easier to process than an acronym, too.

I hope you like using the Operation Tower yourself.

PS: I have actually written about this before, and you can track the change in how I have used it over time if you read the previous blog posts about it:  The Reorder of Operations (2015) and Holding it Together (2016),

UPDATE: I wrote about this again a year later, converting the Operations Tower to a Tower of Stickiness.

This entry was posted in How people learn (or don't), Thoughts about maths thinking and tagged language, notation. Bookmark the permalink.