This blog post is about a piece of the MLC learning environment which is very special to me: the date blocks. It’s a set of nine blocks that can be arranged each day to spell out the day of the week, the day number, and the month. I love changing them when I set up the MLC in the morning, so much so that since the face-to-face MLC closed due to COVID-19, I brought them home and have been changing them each morning here in the dining room.

The story of how this object came into the MLC is the reason it is so special to me.

It began with a Christmas countdown calendar that my wife’s brother and his wife gave to us one year. It has two blocks that are able to spell out how many days there are until Christmas. Every year in our house we hang it up on the 1st of December and take turns changing it each day. 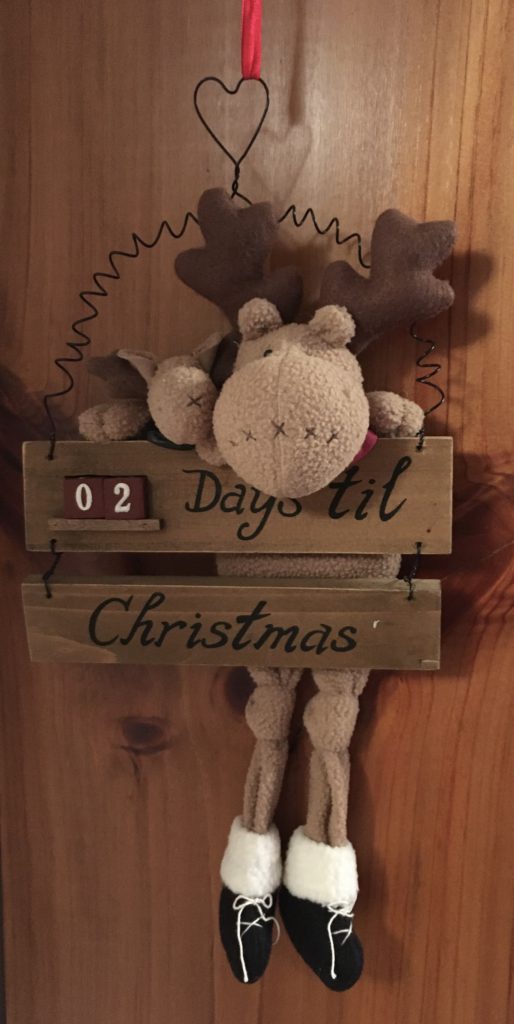 A couple of days before Christmas in 2012, I was thinking about how very soon it would be 365 days until Christmas. I knew that even though we only use our countdown calendar for the numbers from 25 to 00, it is possible for it to count down from 32, and I wondered if you could make a set of blocks that counted all the way down from 365.

I asked this question in the online One Hundred Factorial discussion area that we had at the time. Over a couple of weeks of very slow discussion, we discovered you can only count to at most 87 with three blocks if you must have all three on display, and so you need at least four and (possibly even more) blocks to be able to count all the way from 365 to 0.

At this point someone suggested that since we already had the ability to spell 1 to 31 with two blocks, maybe we could use three extra blocks to spell the month. This was an intriguing suggestion. If you’d like to think about it yourself for a bit, then I suggest you look away now, because there are about to be spoilers…

If you look at the first three letters of all twelve months, there are 19 letters: JANFEBMRPYULGSOCTVD. This would seem to say it’s not possible to spell all the three-letter months with three blocks because three cubes only have 18 faces.

However, the number blocks that inspired all of this are only able to produce all the numbers they do by allowing the 6 to also represent a 9 when you turn it upside-down. So we thought maybe there are letters in the list that could be other letters if you turn them the other way. The only candidates we could see were U and C if we drew them in exactly the right way.

Or is it really impossible after all? We couldn’t see any letters that could be turned into each other, but we were using capital letters. I suggested that perhaps we could use small letters instead. Then the u could be turned upside-down to be an n, which means it might be possible for a and u to be both on the same block and different blocks, if the u from the other block was actually an upside-down n. We still need to have both u and n for this of course, so unfortunately that’s still 19 letters to fit onto 18 faces. The letters p and d to the rescue! They can be rotated into each other, and they don’t have to both appear in the same month abbreviation!

Of course, you still have to figure out exactly how to put the letters onto the blocks, and that I was able to do on the 14th of January 2013. This is a photo I took at the time. 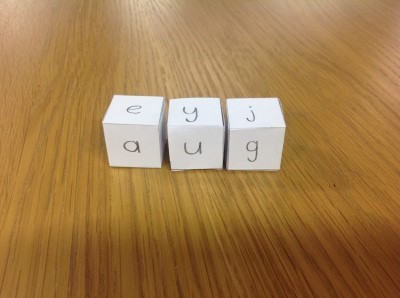 But I couldn’t stop there. The days of the week also have three-letter abbreviations, and so I made a set of three blocks for those too. These were much quicker to figure out because there are only seven days after all!

This left the day number, which I knew already could be done with two blocks, but it seemed weird to have only two blocks for that when the weekday and the month had three each. I decided that since I wanted to use three blocks, I might have the leeway to have blank faces so I could spell the one-digit numbers without a leading 0, and so that there weren’t redundant faces, I decided to try to include the “st”, “nd”, “rd”, “th” suffixes too. I did in fact figure out how to do this, though I am not at all sure it’s the most efficient solution.

And so after a day of avoiding other work by playing with cubes, I came up with a solution on the 15th of January 2020. I chose to display the 1st of January so that I could make it clear there were blank faces and more than just “th”. 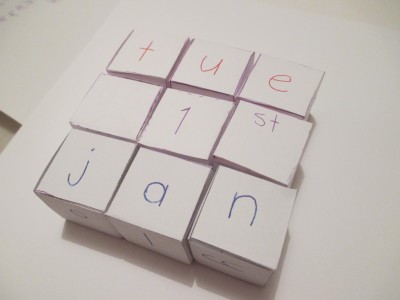 I put these paper blocks on display in the MLC next to the sign-in sheet box (yes we had a paper sign-in system in 2013), and I changed them every day through Summer School. When first semester arrived with a crop of new students, I decided it was high time for a sturdier more permanent-looking set. This set is made of cardboard, which was painted in dark paint, pasted with printed letters, then painted over with PVA glue as a lacquer. 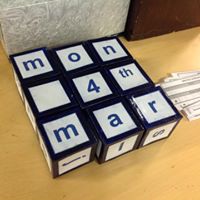 This would be the end of the story except for one extraordinary epilogue. One of our regular students had observed me changing the blocks every day, and had noticed that while I could stack them on top of each other to make the date visible, they were a little precarious. So he took measurements and made a case for them that they could fit into, to be properly on display. He presented it to me on 22nd April 2012. The most impressive part is the handle at the top, which is an MLC and Writing Centre branded pencil. The MLC and Writing Centre shared a room when we moved into the Hub Central building in 2011 and even though they moved into their own room just around the corner in early 2012, we used these pencils for some years later. 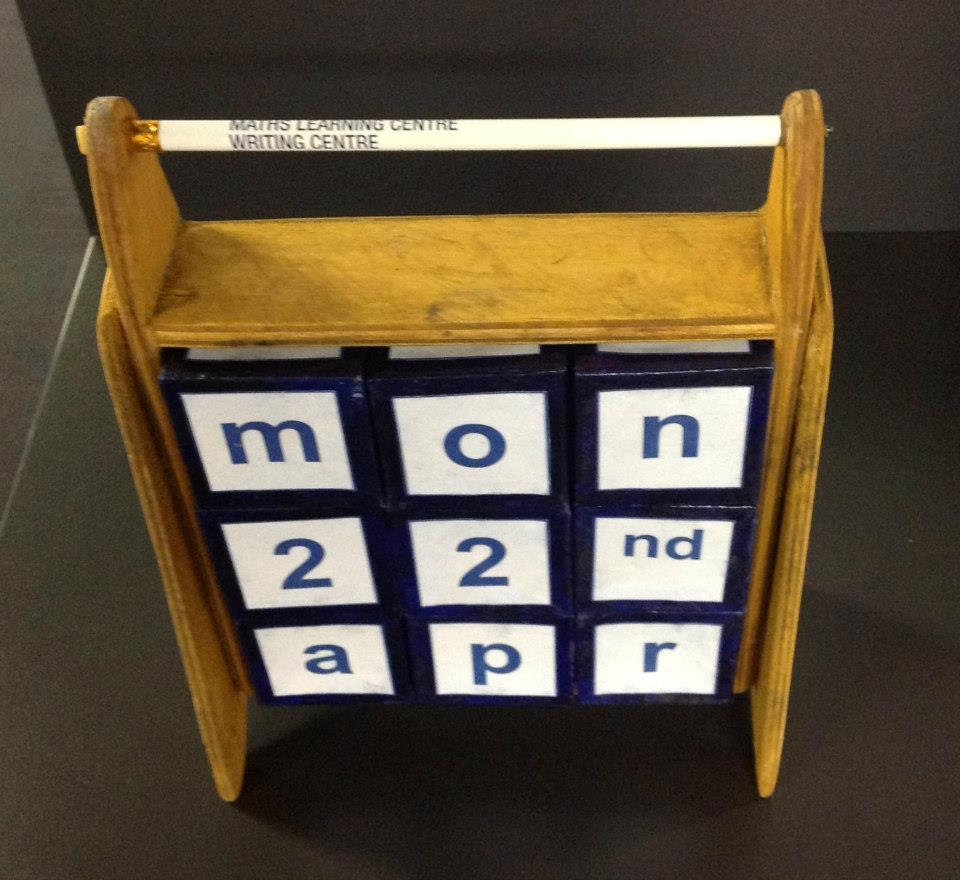 So that’s the story of the MLC date blocks. They are special to me because they grew out of a wondering, that became a puzzle at One Hundred Factorial, that inspired a new puzzle following our MO of “the goal is not the goal”, and the solution has some really lovely reasoning and problem-solving. They remind me of all this wonderful mathematical thought, but even more than this, they are also connection to a student who loves the MLC environment so much he would build something for us.

Not many things hold so many special memories, and a calendar seems an appropriate sort of thing to do so.

This entry was posted in One Hundred Factorial, Other MLC stuff. Bookmark the permalink.