Changing the goal of the Numbers game

I conscripted the game Numbers and Letters seven years ago to help promote the Maths Learning Centre and the Writing Centre at university events like O’Week and Open Day. Ever since then, it has always bothered me how free and easy participation in the Letters game is, while the Numbers game is much less so. People seem determined to only put answers up on the board if they are right, and even rub off answers that don’t produce the target after all. And it’s a real hard sell to get people to try for an alternative solution too. Once a solution is found, people stop. I have always been worried that the game sends the wrong message entirely.

This Open Day I had a remarkable idea: instead of stating in the rules that the goal is to achieve the target, and trying to encourage people to take a different approach, what if I just changed the stated goal! I don’t know why I didn’t think of it before, to be honest!

So this is my new version of the Numbers game instructions:

Help to make calculations that produce as many numbers near the target as possible, each calculation using some or all of these two big and four small numbers, and any combination of +, -, ×, ÷, and brackets. (Numbers can only be used in each calculation as many times as they are in the list.)

For posterity, I choose the numbers randomly from pop-sticks that I painted:

Since coming up with this on Open Day, I’ve put a daily Numbers game on the board in the MLC Drop-In Centre, and it’s been a delight to have students and staff join in and add their solutions.

After explaining to students that the goal is now to get as many numbers near the target as we can get, all of a sudden they start just saying things to write on the board. Mostly we don’t even get the target until quite late in the piece, because people are excited that they can modify what’s there to get other numbers. Even if the target is produced early, there is still a desire to fill in the numbers on either side, and then the whole set of 10 that contains the target.

That modification of existing answers is my favourite part. I used to work it in before when I would put a wrong answer up and fiddle with it to get closer to the target. But now it just happens naturally because the goal is just to make as many different answers as possible.

Here are four games from the last couple of weeks: 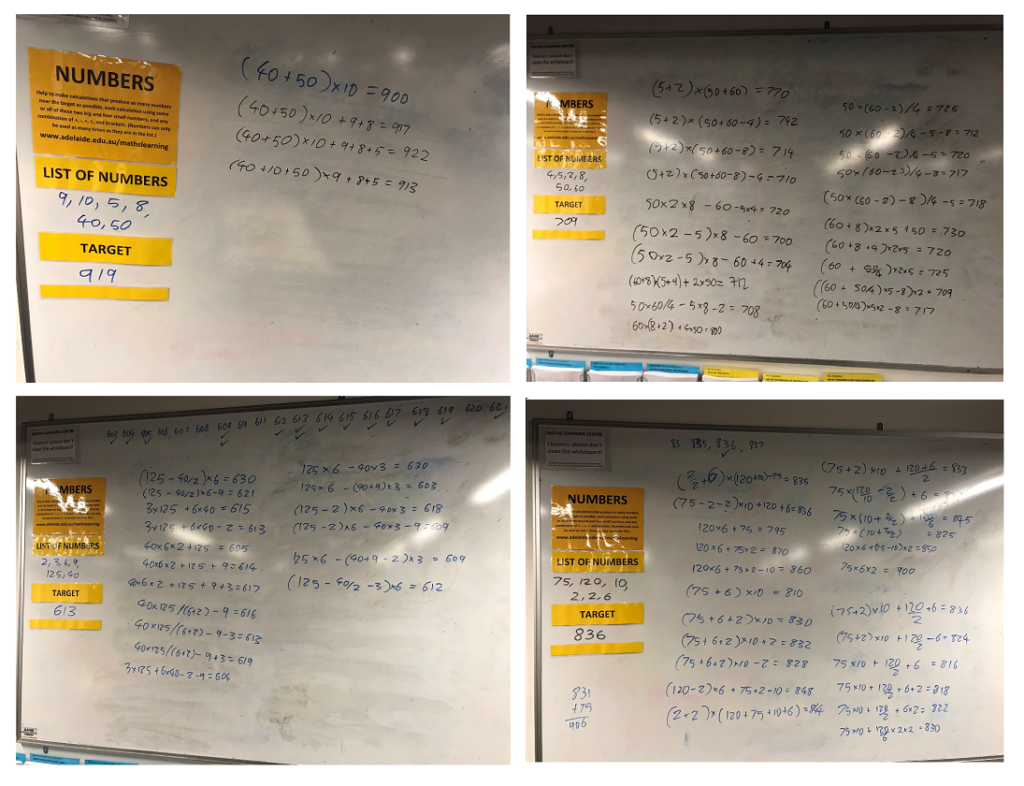 As a testament to how absorbing this new version is, I came back to work on Monday last week, after having worked from home on Friday and a student arrived early to see if there was a game yet, as well as to show me all the ones they came up with when I wasn’t there on Friday.

I am so very pleased that this new version of the game works so well, and a little ashamed that I didn’t think of it earlier. As much as my catch cry is “the goal is not the goal, the end is not the end”, really sometimes you have to explicitly change the goal.

PS: Every day, people have come to look at the board when I am starting the game, and they say “Ohh, this is like Countdown!” My response is always that yes it is like Countdown, but it’s BETTER because of three major differences:

This entry was posted in One Hundred Factorial, Other MLC stuff, Thoughts about maths thinking and tagged Drop-In Centre, games. Bookmark the permalink.