This blog post is about a metaphor I use when I think about the order of operations: the idea that the various operations are stickier than the others, holding the numbers around them together more or less strongly.

The idea begins with the fundamental idea in arithmetic, that maths working proceeds by replacing something with something else you know it’s equal to. When working on an expression involving numbers and operations, to proceed further, you need to find a piece of the expression you can replace. The order of operations describes the rules for when you are allowed to replace right now a part of an expression involving numbers and an operation. (I usually draw the order of operations using the Operation Tower.)

For example, look at the following expression:

When people describe the order of operations, we usually talk about it saying which operations can be done first, saying that some operations should be done earlier than others, and you do them left to right if there’s no preference, and brackets override the order. That’s how I usually describe it.

But this doesn’t quite match with what I describe above. For a start, it’s actually correct to do the subtraction before the power even though the division is supposed to be done earlier than subtraction. I usually tell students that the order of operations just tells you which operations go before others when they’re nearby to each other. So that subtraction is too far away from the power to really make a difference if I do it first or second.

But then there’s weird problem with subtractions near to additions and each other. I can’t replace the 2 – 5 in the above expression because that would stuff up the 7 – 2. But there is nothing in my description of “nearby” that would tell you there is this preference. You have to fall back on the “left to right” idea from the traditional order of operations again.

For some reason I really don’t like this. The left-to-right idea seems completely against all the effort we take to teach students to be flexible with their arithmetic, where we encourage them to pull numbers apart and put them together in new ways to make the arithmetic easier to do and to understand. Plus it’s not how I actually do it. When I read an expression, I scan across the whole thing first, and then I pick a spot to work on that feels right to me, deciding that it’s ok to work on that bit because it doesn’t cause problems with the things around it. I make my decision of which operation to do locally, not globally.

And there is one final thing: when we port all of this order of operations stuff up to algebra, we start to think about terms, which are pieces of expressions joined together with multiplication and exponents. We learn to see those things as one blob, separated by the minus and plus signs.

So it seems that the operations have different levels of stickiness, and the ones that aren’t commutative stick stronger to one side than the other.

But there is one thing left to think about: grouping symbols like brackets and the horizontal bar. They’re not operations, but they do play a part in holding expressions together. Indeed, for brackets holding things together is their entire purpose. In fact, the stuff between the brackets, or under the bar in a square root, all that stuff is wrapped up together into one number and can be treated as one number for the purposes of moving stuff around in algebra. So maybe the grouping symbols work more like a box you put things into, with operations outside stuck to the box itself rather than to the stuff inside it.

So those are my fairly rambling thoughts that explain why I rather like this way of describing the order of operations. I’ve used the stickiness metaphor before, but not until now have I thought about it as deeply as this, and I actually like it even more than I used to, now that I’ve connected it to replacing.

So, to sum up, here’s how I think about the metaphor:

And so in my head, the Operations Tower has become a Tower of Stickiness: 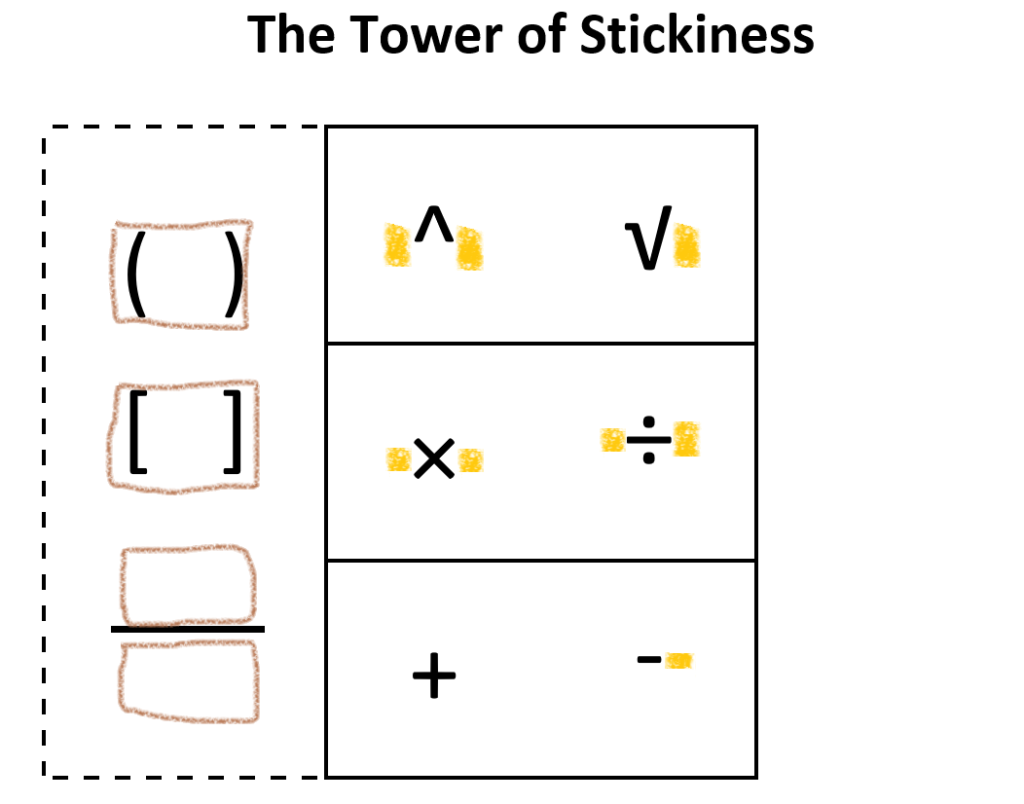 PS: I had this thought that I need to add here, lest I forget it. I reckon that it would be much easier to help people understand the idea of an order of operations that allows for flexibility if you did just addition and subtraction first, without any other operations. Knowing that 7+5 – 3 – 2 has a few choices for how it can be done would be a great advantage before you introduce multiplication and division into the mix. Plus, a string of additions and subtractions could easily represent a story of adding and taking and so your learners would know what the correct answer is supposed to be! Anyway, that’s a thought to wrestle with another day.

This entry was posted in Thoughts about maths thinking and tagged calculations, explanations. Bookmark the permalink.