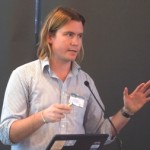 The Centre congratulates Sean Martin on being awarded the degree of Doctor of Philosophy on the 20 August, 2013.  His thesis is entitled “The role of modifiable risk factors in the presence and development of lower urinary tract symptoms (LUTS) and sexual dysfunction in ageing men.”  His primary supervisor was Professor Gary Wittert.

During his PhD, Sean has published 17 papers contributing to the field of men’s health, 4 as first author.  His work has generated new knowledge on the association between progression of LUTs and type 2 diabetes and cardiovascular disease, thus providing important diagnosis and early intervention opportunities. His work on erectile dysfunction (ED)  has shown that increasing age, abdominal fat mass and obstructive sleep apneoa risk were associated with ED severity. Lifestyle intervention to address obesity will aid in addressing all of these serious health concerns.

Sean Martin was awarded the inaugural FFCMH PhD scholarship. Following his honours year in 2003, Sean joined the University’s Discipline of Medicine to work in Professor  Wittert’s clinical trials team working on a novel obesity compound.  He has since managed the Florey Adelaide Male Ageing study which then expanded into the MAILES study, one of the largest longitudinal male population studies of its type, and which formed the basis of his PhD work.