Spice of life? – Investigating the role of Curcumin in prostate cancer 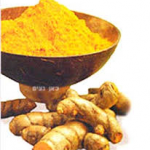 Curcumin from tumeric plant, a member of the ginger family

Ms Lauren Giorgio’s presentation on the potential role of curcumin in prostate cancer generated a lot of interest at the September Men’s Health Seminar.

Curcumin is the polyphenol component of the spice turmeric, commonly used in asian cooking and as a colouring agent.  In ongoing studies, curcumin has already been shown to have anti-cancer properties in solid tumours. In prostate cancer, the action of curcumin has previously been investigated in the tumour cells itself but not in the fibrous tissues that surround the tumor cells (the microenvironment) which also plays an important role in tumour survival.  Lauren presented her PhD work where she looked at the effect of curcumin on both tumour cell and fibroblast cell viability and cell function characteristic of prostate cancer (androgen receptor signalling).

Lauren’s study found that curcumin reduces cell viability and completely blocks androgen receptor signalling in both prostate fibroblasts and cancer cells but that the mechanism by which curcumin affects cell viability is different between the two cell types.  The concentration of curcumin used in these studies was considerably higher than that found in most diets but this new data suggests the possible action of potential curcumin-based therapies on both the tumour cells and its microenvironment.

This entry was posted in Research and tagged drugs, prostate cancer. Bookmark the permalink.